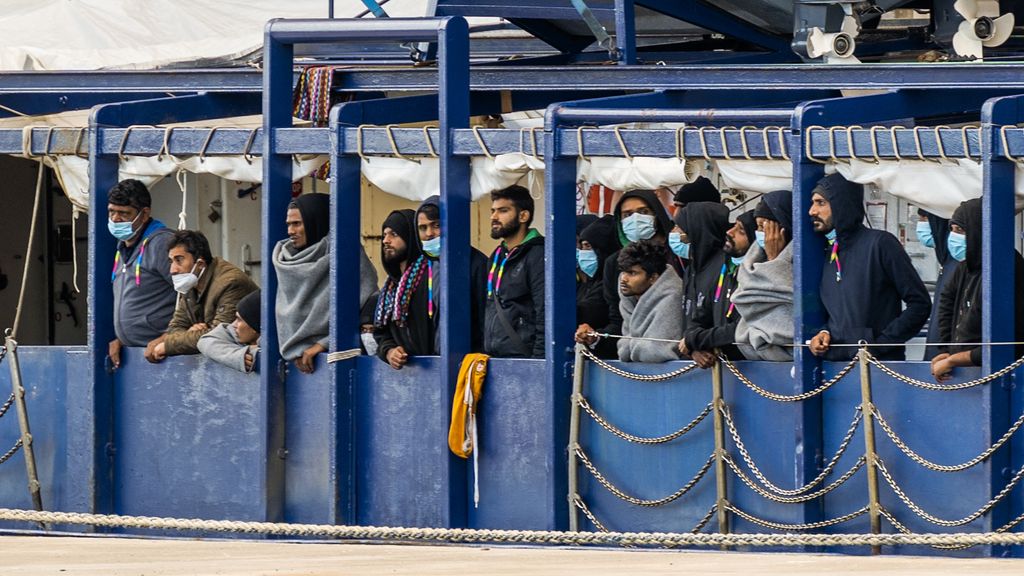 A large portion of the migrants who have drifted off the Italian coast for more than a week aboard the relief ship Humanity 1, have disembarked in the port of Catania after all. Italy’s new right-wing government has previously refused to accept refugees.

144 of the 179 migrants were allowed to disembark in the port city of Sicily. A medical examination concluded that they were in a fragile state of health, a condition that Italy had set up to receive people. The other thirty-five immigrants are too healthy to disembark in Italy’s opinion.

After the refugees arrived, the boat was told to leave port, according to aid organization SOS Humanity. The captain of the ship refuses. He only wants to sail when all the migrants have disembarked.

A group of activists defending the rest of the migrants on board:

The new Italian government believes that aid organizations rescuing migrants from the Mediterranean should turn to countries flying their flags. In the case of Humanity 1, this is Germany.

The German foreign minister had already asked Italy before the weekend to disembark the migrants. Aid organizations describe the new immigration selection policy as illegal and inhumane.

New Prime Minister Giorgia Meloni’s policy could also draw on criticism in Italy. According to the opposition, the decisions violate human rights and international rules. Leftist politician Abubakar Soumahoro says the new government is playing a political game on the backs of women, children and traumatized people.

Italian Foreign Minister Antonio Tajani stressed that the selection process is important. In this way it will be investigated where the refugees come from and how they are doing. “We can’t turn the Mediterranean into a cemetery, but we need to know who’s on board and where they come from.” Brussels is demanding a solution to the problem of boat migrants.

“The fact that the migrants on these ships are stirring up a political debate in Europe is a good thing for the new Italian government. Right-wing Giorgia Meloni already had the ambition to put immigration at the top of the European agenda. Her government also believes that it is also unfair that Italy, in its geographical location, hosts more refugees and migrants. from other member states of the European Union.

Ideally, Meloni would like migrants to be told before they leave North Africa if they have a chance of asylum in Europe, so that they don’t make the dangerous crossing of the Mediterranean with smugglers. This only requires good agreements with the countries from which the migrants leave. This is difficult for political reasons, for example in unstable Libya. Moreover, these agreements require a lot of money. That’s why Meloni also hopes to convince the rest of the European Union of his strategy.

By accepting only people who need medical care, the government wants to increase pressure on other countries to have a political discussion on the subject. However, Meloni does not want to pressure its European allies too hard. Hence the decision to allow entry to migrants who are vulnerable or in need of medical assistance.”

Three other ships docked off the Italian coast with about 900 refugees on board. The charity ship Geo Barents, sailing under the Norwegian flag and carrying nearly 600 refugees on board, was also asked to enter the port of Catania. These immigrants are also medically screened. After that, it will likely be decided whether or not they can get off. The other two boats should remain at sea for the time being.

Aid agency ships transport only a small portion of the migrants to safety at sea. More than 6,000 other migrants have arrived on the Italian coast alone in the past 10 days. Some are withdrawn from the water by the Italian authorities.

The number of migrants fleeing to Italy has risen sharply compared to last year.