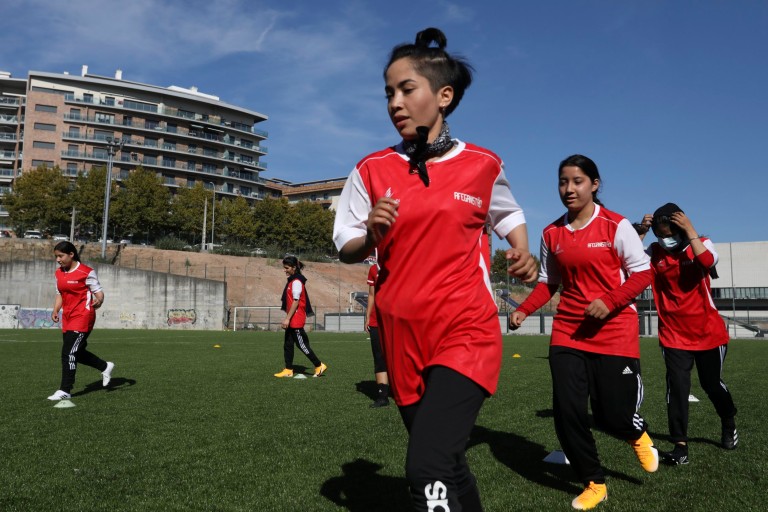 The Afghan girls’ soccer team players have reportedly been given visas to come to the UK. According to the British newspaper, “The Sun”, about 111 players, coaches and family members of the team have been given the green light to build a safe and permanent home away from the Taliban.

However, the Afghan players have been granted asylum from Portugal and it is not clear which country they will end up with in the long run.

They are so happy to be back on the pitch! ❤️⚽️ https://t.co/gidQwx76yG

The group of girls have lived on temporary visas in Pakistan since they fled their homeland after the takeover – and risk being sent back once their asylum period ends. The girls were recently surprised by the women’s team leader, Farkhunda Mohtaj, who lives in Canada and helped them get to Lisbon where she trained with them for several months during their first session.

Activists have called for the young group to be given permanent refuge in the UK, fearing they will be persecuted by the new Afghan government and stop playing football.

Leeds United Football Club was among a number of organizations urging the government to grant asylum to girls.

Under the former Taliban regime in Afghanistan, women faced severe repression and were prevented from education and sports.

The UK left a number of people behind during a hasty evacuation from Kabul and has been criticized for not bringing in enough people and abandoning some who helped during the British military mission in the country.

Thank you Fundação Benfica for providing the Afghanistan Women’s National Team with such an exceptional experience!

Kashif Siddiqui, co-founder of the Football for Peace charity that led the campaign to help the girls, thanked British Prime Minister Boris Johnson for “giving a future to these players”. He said in a statement: “We are still waiting to hear the confirmation through official channels, but if it is confirmed it will mean that 111 Afghan girls, their family and their coach have changed their lives forever by Britain. Every visa approved means a better life, the right to education and the freedom to play football. foot.

He continued: Without Britain, they faced the return of the nightmare that is Afghanistan. This decision gives them a future to play for Leeds United and other clubs. We are also very grateful to Pakistan for providing them with temporary safe haven while the UK considered their case.”