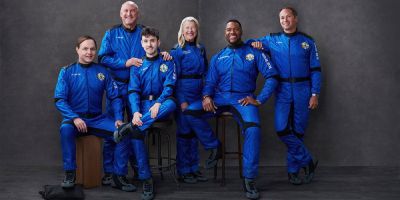 US space company Blue Origin has put people briefly in space for the third time with its reusable New Shepard rocket and accompanying space capsule. During this sub-orbital spaceflight, six people were lifted to an altitude of 107 kilometers after which the capsule returned safely to Earth. One of the crew members was 74-year-old Laura Shepherd Churchley, the daughter of the first American in space, Alan Shepard. Also on board was the New Shepard capsule, famous American TV host and former NFL player Michael Strahan.

The eighteen-meter-long, reusable New Shepard rocket lifted off from the Blue Origin launch complex in Texas at 3:45 p.m. Belgian time and moved the space capsule to an altitude of about 107 kilometers as planned. As during previous missions, the NS-19 flight also lasted about 11 minutes and crew members moved over the Karman Line for a few minutes. The Karman Line is an imaginary boundary at an altitude of 100 km above the Earth’s surface and is considered internationally as the “beginning of space”. The New Shepard rocket also returned to Earth and landed as planned on a special platform so it can be reused for new commercial missions. The capsule, which contained six space tourists, landed safely on the ground shortly after the rocket with the help of parachutes, after which they emerged from the capsule one by one after a few minutes.

During this NS-19 mission, six people were put into space for the first time. During the first two manned missions earlier this year, four people briefly went into space, including Blue Origin founder Jeff Bezos. While Michael Strahan and Laura Shepherd Churchley traveled as guests on Blue Origin on this mission, the other four passengers paid for their seats on the New Shepard. Father and son Cameron Pace and Lynne Pace were also among the four passengers who paid the fare. For 74-year-old Laura Shepherd Churchley, this spaceflight was very special because she is the daughter of the first American astronaut Alan Shepard who also took a short 15-minute spaceflight in 1961. The New Shepard rocket is also named after the first American astronaut Alan Shepard.