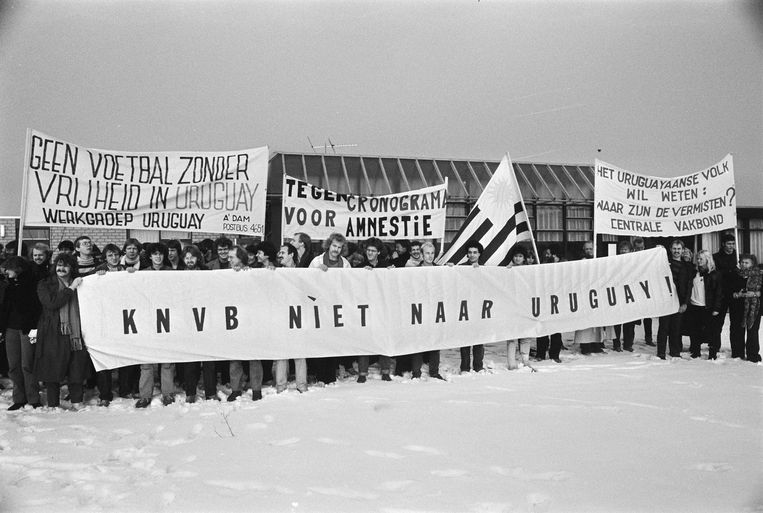 The call for a boycott of the 1978 World Cup in Argentina is well known. But in the winter of 1980 there was also a protest in the Netherlands against the KNVB over the Uruguayan Orange Football Championship. Frits Barend, among others, refused to play.

In the run-up to the World Cup in Qatar, there is increasing criticism of the human rights situation in the host country. In the winter of 1980 there was also a protest against the KNVB in our country. Then more than a hundred amateur teams joined a strike to protest the soccer championship in Uruguay.

At the time, that country celebrated hosting the FIFA World Cup for the first time fifty years ago. The South Americans did it in a friendly tournament. The six world champions until then were invited to the so-called Mini World Cup. Only England thanked for not blocking the passage of its own competition.

This was replaced by the Netherlands, the losing finalists in 1974 and 1978. In return, the KNVB received a sum of at least 900,000 guilders, reportedly. NRC Handelsblad in November 1979. The union thus ignored the widespread violation of human rights in Uruguay at that time.

Six months with a headscarf

Since the 1973 coup, thousands of people have been arrested and tortured, including doctor Tito Pais, who later fled to the Netherlands. In November 1975 he was taken from the street by armed men in civilian clothes, after which he was held for nearly three years and subjected to physical and mental abuse. “I sat with a hood on my head for six months and could not see anything,” he later told Dutch media.

In part because of these testimonials, KNVB ended up in a heated debate about sport and human rights, just as it did during the World Cup in Argentina two years ago. An action for the Overamstel’s second Saturday team from Amsterdam suddenly turned into a national protest.

In early November 1980, the players of this team announced their strike for the next match. In this way, the team wants to indicate that it does not agree with the decision of the Football Association to send the Dutch national team to a friendly football tournament in Uruguay.

just for the money

The Overamstel players ended up in a huge media storm, because in the following weeks another 125 teams from around the country refused to play football. Frits Barend, who was playing for Buitenveldert, also joined. “We had very good contacts with Overramstel,” he recalls. “These were good guys.” As a sports journalist, he had witnessed the World Cup in Argentina and was very angry when the KNVB agreed to a non-binding tournament in a country that violates human rights, just for the money.

KNVB Director Eric Fillet rejected the football strike at the time. “Protest is a good democratic right, but the place to make this noise is union meetings. That is why I do not approve of such individual actions.”

Due to bad weather, most amateur football matches were repeatedly canceled in November. On November 30, Merlijn of Tilburg was the first team to walk off the field with all the teams, followed in the following weeks by other teams. The exact number can no longer be determined due to this prevalence. The striking teams were punished by the KNVB with a two point deduction and a fine. In Uruguay, the orange lost to the host country, and played a draw with Italy.

Why am I going to the World Cup in Qatar

The king should stay at home, the government too, and a tiny majority (53 percent) of our people would think the Dutch national team should not travel to the World Cup in Qatar. At least, that’s what a survey by EenVandaag showed this week. You should take these kinds of studies with caution, I think, but the implication is clear: We just don’t feel like we’re in the World Cup.