Another Russian ship hit: the frigate Admiral Makarov is on fire 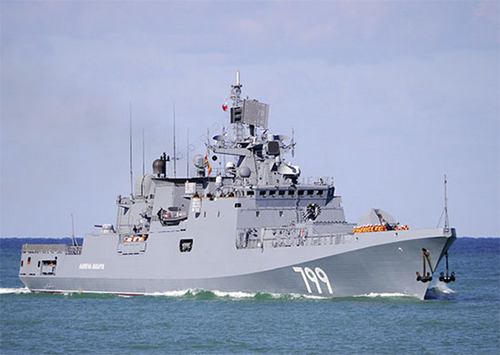 It is said that Ukraine once again caused serious damage to a Russian warship. It will be Admiral Makarov, a frigate of the Grigorovich class. Evidence continues to emerge to support the claim that the ship was hit by a Neptune anti-ship missile. It is even said that the frigate sank.

Still (in contrast to the MarineShips.nl edit) from Makarov’s Burning Movie. Whether Makarov really is not clear from this photo, but it is a frigate of the class of Admiral Grigorievich. There are two frigates in the Black Sea.

At first, the rumors were about two ships. Admiral Essen or Admiral Makarov had been wounded. All fingers are now pointing at Admiral Makarov. It is said that the frigate hit the coast of Odessa near Snake Island, which caused a fire and had to call in Russian relief ships.

He posted pictures of a burning Russian frigate on social media. As far as MarineShips.nl can verify, these are authentic.

An unverified, but reasonably convincing video of a frigate in flames following reports that Admiral Makarov was hit by Ukrainian anti-ship missiles ??????????????????????? pic.twitter.com/q1CI3tCknI

Anton Gerashchenko, adviser to President Zelensky and former Minister of the Interior, announced on his Telegram page that Makarov had indeed been hit by a Neptune missile.

Rescue ships en route from Crimea
It is also said that several rescue ships and rescue aircraft have rushed from the Crimea to Admiral Makarov and are now doing their best to rescue the frigate on a journey to the bottom of the sea. Helicopters will try to rescue the crew. This will be about 180 people, according to the Ukrainian broadcaster Domskaya.

Meanwhile, the United States is said to be monitoring that as well. Surveillance drones keep a close eye on the Gulf. Forte11 reconnaissance aircraft will be used for this, as can also be seen from the websites of aircraft controllers.

According to EuroWeekly News, a large crane has now moved from Sevastopol to Snake Island. This floating crane is generally used for towing and salvaging ships.

Admiral Makarov is a 125-meter frigate of the Grigorovich class that entered service in December 2017. It has a maximum displacement of more than 4,000 tons and a maximum speed of 30 knots.

big setback
After the cruiser, assault boats and landing ship, Russia now lost a frigate. However, the loss of this ship represented a major setback. Makarov launched Kalibr cruise missiles at Ukraine, and, unlike Moskva, they are new.