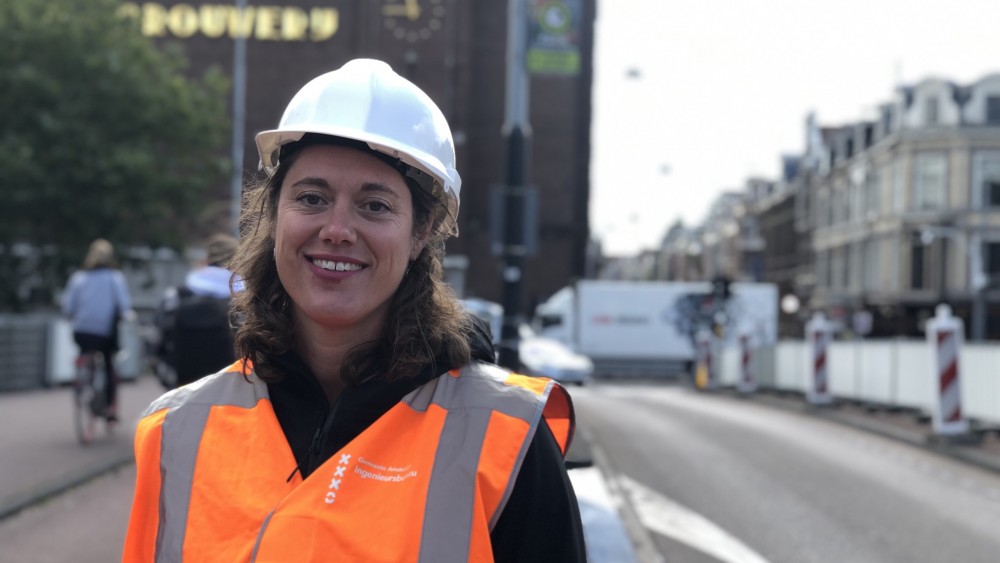 The busy Stadhouderskade intersection with Ferdinand Bolstraat is the place you should always watch out for. This place is now safer, giving cyclists more space and better separating them from other traffic. Environment Director Marieke Nonhebel talks about working on the AT5 Het Verkeer program.

The (still messy) intersection should be a safer place for cyclists in a couple of months if it’s up to Environmental Manager Marieke Nonhebel. “Now that the North/South line is operational, there are far fewer trams here. Trams can now share the road surface with the vehicle, which means we can make more room for cyclists.” Due to the space created, cyclists have a better view of cyclists.

Pedestrians and locals are of course happy to make the intersection safer. The sausage seller often sees things go wrong there. “A lot of accidents happen here, so I think it’s a good thing.” Pedestrians are also happy to work. “I always think it’s a positive thing when work is done on the road.”

The biggest challenge while working is all cyclists. “Cyclists sometimes want to get past it, which is why we have several traffic controllers to steer well,” the district manager says. One rider immediately noticed the presence of traffic controllers: “I was directed to my place when I wanted to ride a bike on the sidewalk. But of course that’s not allowed.”

See also  Webern van Haga is launching a new party. Entrepreneurs should stand on a pedestal

Diversion of bicycles and cars

Until mid-October, cyclists from the East cannot proceed directly, and are diverted via the Weteringcircuit and Weteringschans. Cyclists from the center cannot continue straight ahead and must continue via Museum Bridge or Frederiksplein.

We will be diverting cars from the center via Weteringschans and cars may temporarily turn left at Museum Bridge. The tram will continue to operate according to the normal schedule. Everything should be ready before Christmas.

From October 11, the intersection will be closed to all traffic for four weeks.