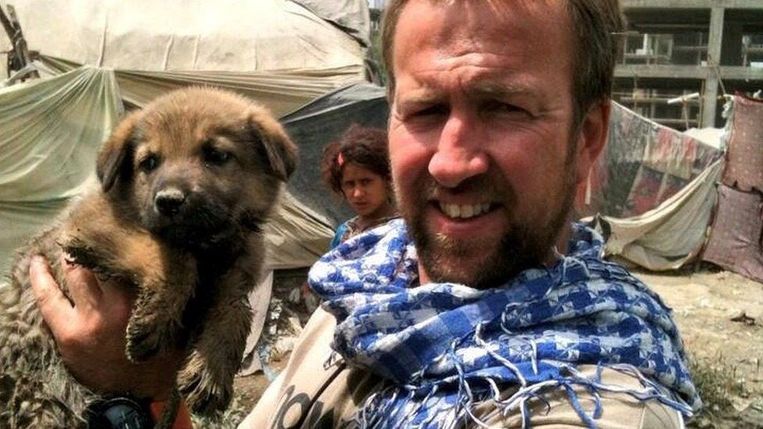 Farthing, 52, remained in Afghanistan after his military service to set up a shelter for dogs and cats. In the remote province of Helmand, he was shocked by local dog fights. He intervened and released the dogs, which made their way one by one to the military base at Now Zad. There they became pets of soldiers. Some soldiers took dogs and cats with them when they left. Farthing wrote a book about it: One Dog at a Time: Saving the Homeless Helmand.

So it’s no wonder he did everything he could to bring his remaining dogs and cats to safety. Farthing refused to leave without the animals and chartered a plane at the expense of a large group of animal lovers.

The rescue operation drew criticism because Farthing’s procedure took so much time and energy from the British Army that it could have been better spent. Twenty-four Afghan staff at the shelter also received permission from the British ambassador to come to the UK, but when Farthing was given the opportunity to go to the airport under military protection on Thursday, they were stopped by the Taliban. Farth remained with the animals, but without his companions.

In a blunt press release, the defense said “Farthing and his pets” were rescued. Minister Ben Wallace had complained about the “intimidation” behavior of the veterans. He was said to have told his private advisor in an engagement sermon that he would ruin his political life if he did not cooperate. Conservative MP Tom Tugendhat, another veteran of Afghanistan, thought it was shameful to bring animals to safety, but not an interpreter’s family, for example.

Farthing has received support from animal lovers on social media. There are suspicions that the wife of Boris Johnson also played a role behind the scenes in the sensational rescue operation that took so much time for British soldiers. Known for her commitment to animal rights, Carrie Johnson made sure her husband’s government considered animal welfare when making policy. A government spokesman denied her involvement.