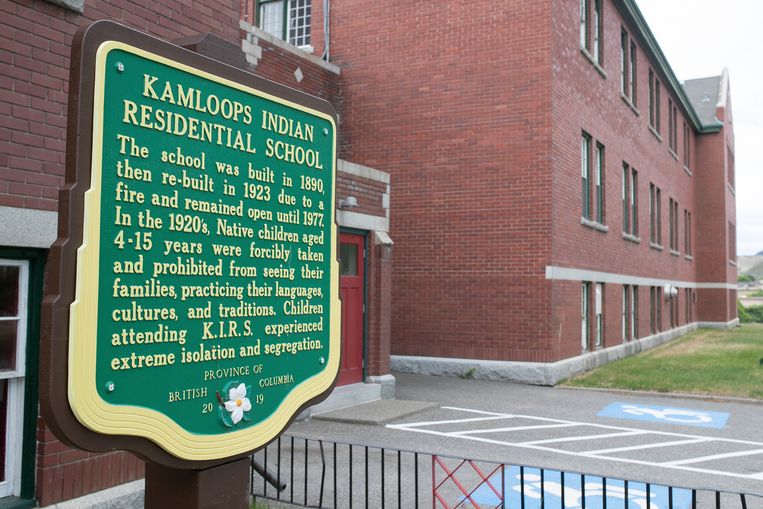 The news was announced last week by Rosen Casimir, head of TKMlaps for the Chekwebem tribe in the town of Kamloops in western Canada. The remains were detected by special radar that could see the bottom at a depth of a few meters. The youngest victim is said to be 3 years old.

Casimir said the investigation would continue in June. It should also be clear whether the numbers are correct and whether these are actually unknown deaths.

It is already known that dozens of children have died at the Kamloops Indian Residential School in the last century. Operating between 1890 and 1977 and holding about five hundred children, in front of this building is a monument with the names of 65 students who died. But in addition, there were dozens of ‘missing persons’, about whom the school administration always told the family they had fled.

“It’s a harsh truth, but it’s our truth, our history,” Casimir told a news conference. “This is something we must always fight to prove.”

The National Truth and Reconciliation Commission has so far documented 4,100 children who died in boarding schools in Canada. However, there have always been rumors of anonymous mass graves. One of them is now in the field near a bend in the river, where the tribesmen have set up a park and built a arena for the annual spiritual dance feast bows.

The tribe has announced memorial services for the next three evenings with sacred fire and drumming. Many flowers have been placed at the monument in recent days.

In 2008, then-Prime Minister Stephen Harper apologized on behalf of Canada for the boarding school system, where neglected, malnourished and abused tribal children were pushed into Western ranks (as happened in the United States and Australia, for example). They were not allowed to speak their own language and had to forget their own religion and customs. The Reconciliation Commission spoke in its 2015 report on ‘Cultural Genocide’.

The organization, which began in 1883, is apparently aimed at resolving the “Native American problem.” “If we want to do something about the Indian, we have to get him very soon,” the adviser wrote in a statement to the government. Schools have been compulsory since the 1920s. In total, 150,000 tribal children attended schools. Last closed in 1997.

The Catholic Church, which has been a partner in colonial Christianization for centuries, has, unlike other Christian allies, never apologized for the practices. However, Archbishop Michael Miller of the Diocese of Vancouver said in a statement that “the pain caused by this news is a reminder that we must expose every tragic situation in boarding schools run by the Church.”

Prime Minister Justin Trudeau said on Friday that the news “broke his heart”. He called it “a reminder of the black and shameful chapter of our national history.”

The next of kin is now demanding more actions and fewer words. The 2015 Reconciliation Commission Report recommends structural funding for centers to alleviate the physical, mental and spiritual pain caused by boarding schools.