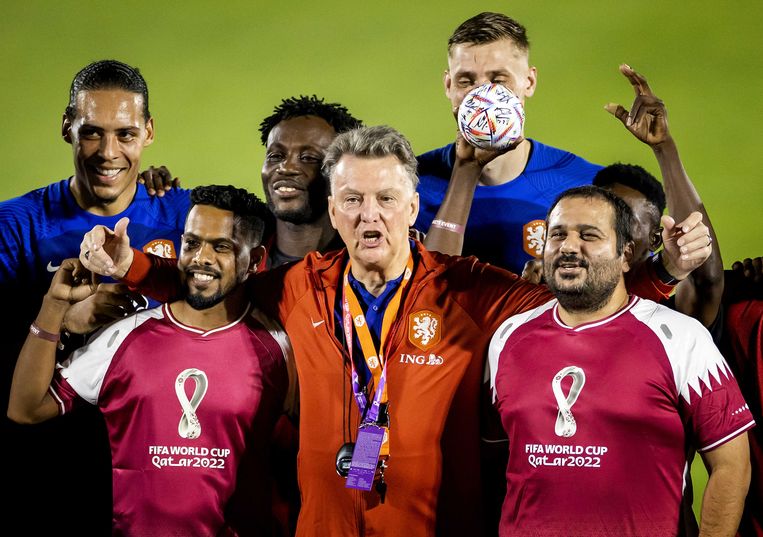 Virgil van Dijk would love to meet the twenty behind-the-scenes stadium builders, he says honestly, not looking at the cameras eagerly rolling in Doha. After an extensive meeting with a group of migrant workers from countries such as India, Nepal, Cameroon and Ghana, the captain said on Thursday evening: “I understand how it works, but it feels a little more personal and honest. Louis van Gaal has already called this event planned. “But we Attention is also important,” said the national coach.

The Netherlands team met the team at the training ground of a large university campus in Qatar, officially sanctioned by the FIFA Football Association. Autographs were signed and enthusiastic high fives were given. Laughter echoed throughout the stadium during mutual feasts. Most of the workers were ecstatic, sometimes literally jumping with excitement.

“The excitement is enormous,” Van Dijk says. “It could have been something very simple, but it’s great that we gave these people a special day.”

The theme surrounding the situation of migrant workers in Qatar has been an important one for years. Millions of people from countries such as Nepal, India and Bangladesh worked, often in appalling conditions, to build stadiums, roads and hotels. According to human rights organizations, there were many deaths, although the exact number of deaths is unclear.

“We are certainly not deaf and blind to this theme,” says van Dijk. “That’s why we wanted to do something: meet the people who really mattered.”

So the Dutch national team is one of the rare World Cup participants to draw attention to the working conditions of millions of migrants in Qatar during the tournament. Earlier, Australia’s players released a special video message about the theme, while Denmark decided to play in special shirts with no visible advertising or logos, including an all-black shirt.

England, USA and Canada have scheduled a meeting with stadium builders in Qatar, but those teams have done so (partly) behind closed doors. The KNVB consciously decided to opt for public access: the entire international press was welcomed in the training sector.

“I understand there are a lot of people who don’t think this is enough,” says de Jong. “That is also allowed. In the context of the World Cup, we tried to do our best in dialogue with the players.

The KNVB is still trying to build a case for a bigger compensation fund from FIFA, along with a group of other European countries including Canada, Australia and the United States. The question is whether it will work. De Jong: “211 FIFA countries are members. Unfortunately, we’re in the minority – and the question is whether we can have our say on Saturday at the big summit, the traditional conference for every World Cup. But we’ll keep trying.”