Erdoan now has his mosque on Taksim Square 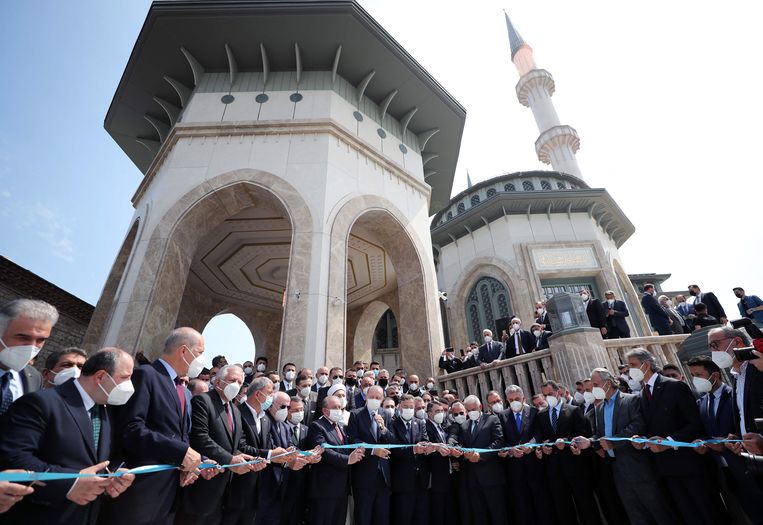 The president’s opponents see the mosque as a provocative part of his Islamization agenda. The 30-meter-high building rises in front of the Monument of the Republic in the center of the square. This represents the father of the homeland, Kemal Ataturk, with a number of believers during the founding of the republic in 1923. The mosque towers over Ataturk.

According to Erdogan, it cannot be the case that around the main square in Turkey, Muslims have not had a chance to pray. “The believers used to pray in newspapers as well as in a chicken coop,” he said. Until Friday, the only place of worship in the vicinity was the Greek Orthodox Church, a stone’s throw from the mosque.

The opening of the mosque fulfills an old wish of the Turkish president. The government posted a video on social media showing Erdogan in 1994, when he had just become mayor of Istanbul, pointing from a building on Taksim Square to the site of the last construction and saying, “There will be a mosque.” However, it took until 2017 before construction could begin.

Taksim Square has always been a place where, both literally and figuratively, the great contradictions in Turkish society are fought off from time to time. In 2013, the square and the neighboring Gezi Park were the scene of a massive movement against Erdogan’s government.

The Gezi movement began in protest against plans for another architectural intervention around Taksim Square. The government wanted to replace Gezi Park with a large shopping center. This plan eventually fell out.

With the opening of the Taksim Mosque, the number of Islamic places of worship with which Erdogan enriched the city reached three. Two years ago, the largest mosque in Turkey opened in the Uskudar region, in the Asian part of Istanbul. In July last year Hagia Sophia, even then a museum, gave the status of a mosque.