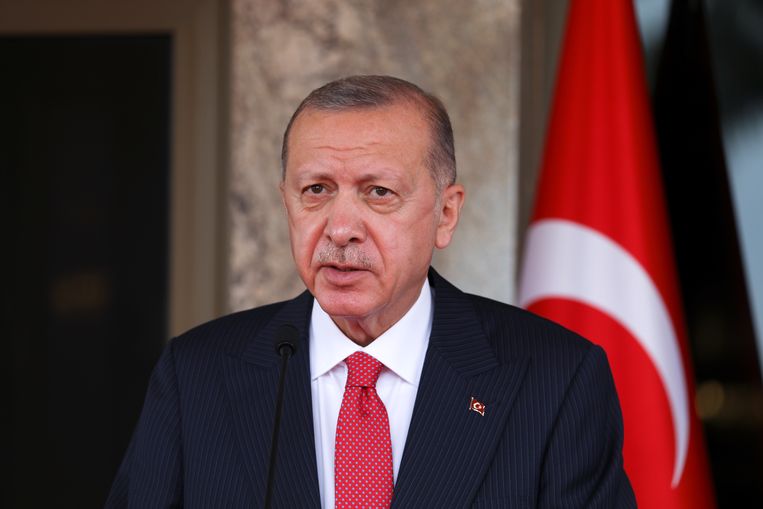 On Saturday afternoon, the Foreign Ministry in The Hague said it had “taken note” of Erdogan’s comments. However, there has been no official confirmation yet that Turkey will actually expel the Dutch ambassador, Marjane de Quastignite. “We are waiting for a call from the Turkish Foreign Ministry in this regard,” he added.

With the measure announced by President Erdogan, Turkey is responding strongly to the ambassadors’ call on Monday for the Turkish government to release businessman and philanthropist Osman Kavala. He has been detained for four years. The European Court of Human Rights ruled two years ago that there was absolutely no evidence against Kavala and that he should be released immediately.

Erdogan’s announcement came in a speech he delivered on Saturday afternoon in the city of Eskisehir. I told our Secretary of State what to do. He told an enthusiastic crowd of supporters that these 10 ambassadors should immediately be declared persona non grata.

The ambassadors were summoned, Tuesday, at the Foreign Ministry in Ankara. On Thursday, Erdogan had already hinted at possible extradition to Turkish reporters. “We cannot afford to allow this group into our country any longer,” he said. Do you think you can give a lecture on Turkey? Who do you think you are?’

It is not uncommon with Erdogan that this rhetoric is not followed by action, but in this case it appears to be happening. Europe and the United States (ie, under Joe Biden) are constantly pressing Turkey to improve the rule of law and take human rights seriously. The president seems to think a line should be drawn now.

However, he thus risks conflict with the countries that need it most in various fields – diplomatically, economically and technologically. Ambassadors from France, Germany, Canada, New Zealand and Scandinavia signed a statement on Monday, as well as the ambassadors of the Netherlands and the United States.

Parties in the House of Representatives responded very decisively to President Erdogan’s announcement. Katy Perry (PvdA) says she’s “on a collision course.” According to the VVD’s foreign affairs spokesman, Ruben Brekelmans, Erdogan is showing his true face with the move “again”. Dirk Jan Ebenk (JA21) tweeted that the Turkish president “has lost his mind and appears to be sultan towards old age.”

Kavala, 64, is a prominent figure in Turkish civil society. He is the director of Anadolu Kültür, an organization that supports cultural and social projects. Anadolu Kültür works a lot with artists, minorities and underprivileged children. Kavala has been detained for four years. He was charged with attempting to overthrow the government during the 2013 Gezi protests and participating in the failed coup in Turkey in 2016.

The Kavala case has become the most important benchmark for Europe in the debate with Ankara about the deterioration of democracy and the rule of law in Turkey. The European Court of Human Rights has decided that the extension of al-Mohsin’s detention is a serious human rights violation. The Council of Europe has initiated criminal proceedings against Turkey. This may lead to the suspension of Turkey’s membership.

“It is important that all member states of the Council of Europe implement the court’s rulings,” the Foreign Ministry in The Hague said earlier this week. The Netherlands will continue to work with other countries on this matter.

The process of entering a dead end

Meanwhile, the climate between Turkey and Europe threatens to cool in other ways, too. The European Commission says negotiations with Ankara on joining the European Union have “already stalled”. The Commission writes this in an unprecedented critical report on relations with Turkey. Never since accession talks began in 2005 has any progress report been so negative.

Brussels is particularly concerned about Turkey’s erosion of democracy and the rule of law. Ankara ignored the commission’s recommendations in this regard last year, according to the report published on Wednesday. The European Commission said the EU’s “grave concerns about the deterioration of democracy, the rule of law, fundamental rights and judicial independence have not been addressed.” “There was a further deterioration in many areas.”

For the first time in all these years, Brussels also states that Ankara no longer seriously intends to implement EU-backed reforms, even though President Erdogan said in April that his country still aspires to full EU membership. After a number of sharp clashes last year with several European countries, notably France and Greece, Turkey appeared to be striving to improve relations since the beginning of the year.