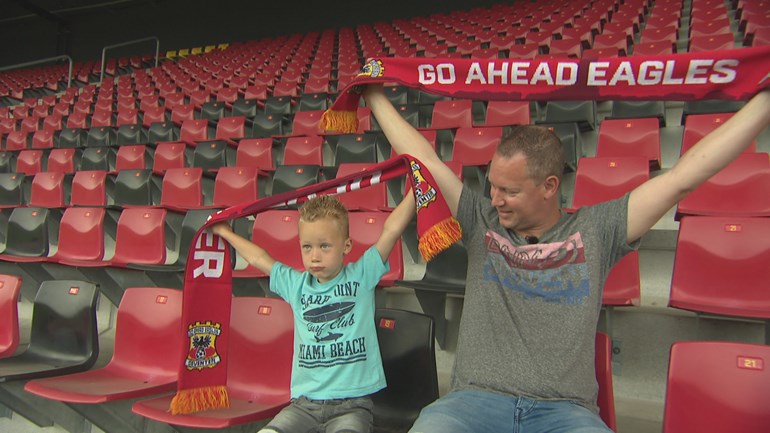 RTV Ost has received about a hundred greetings for Father’s Day in recent weeks. From every corner of the province of Overseas, and from other parts of the Netherlands, even two options came from far and wide: Australia and Canada.

So one of those options came from Wirton. For Father’s Day, RTV took Salander, born from Oost New-Heaton, Marco de Weirick and son Jesse to the ‘Magic Ground’; Go Ahead Eagles’ Stadium de Adilarshorst. “Because of the brain hemorrhage, I can’t tolerate many stimuli,” he says. “I can no longer drive because my left eye has less vision and there are limitations on the left side of the body. It’s hard to go ‘covet’. It’s so awesome that it’s possible now.”

Jesse and his father, G.A. Rob de Zhang, announcer and presenter at the Eagles, is officially welcomed. They get a scarf and a tour. Jesse is allowed to ride a lawn on the main field and yell ‘Hub Covet’ through the microphone from the broadcast room. “We really appreciate this father and son feeling in Go Ahead Eagles,” says Rob de Jong. “That’s why we want to invite them to a home game on ERTV.”

Father Marco de Weirik cannot put his feelings into words. He had thought many times about a real introduction to his son in the club of his life. Now it comes true. “His grandmother already gave him pajamas from Heracles, but we are real covet people. That works with Jesse too.”

See how Marco and son Jesse enjoyed it here:

READ  Australia has sued China over tariffs on Australian wines
“>

Today RTV Ost focuses on Father’s Day on all platforms. On the radio show ZieZoZondag, the three fathers draw attention in response to the choices received. Many reactions show that Father’s Day is alive in Overseas. Those requests were partly to thank those fathers for what they meant to their children.

“He is always there for us,” says Floor Lensing, for example, about his father Arno Reimert of Corsell. She rides him in a truck, which is usually difficult due to his visual impairment. Born in Melbourne, Australia, Henkellover Henk Radellar greets his father at 90 with a delicious Twente lunch. Including currant road. “He lives in Arnhem, but loves Twente very much,” he concludes.