For an ideology that has been praised, Xi Jinping’s thoughts are remarkably vague 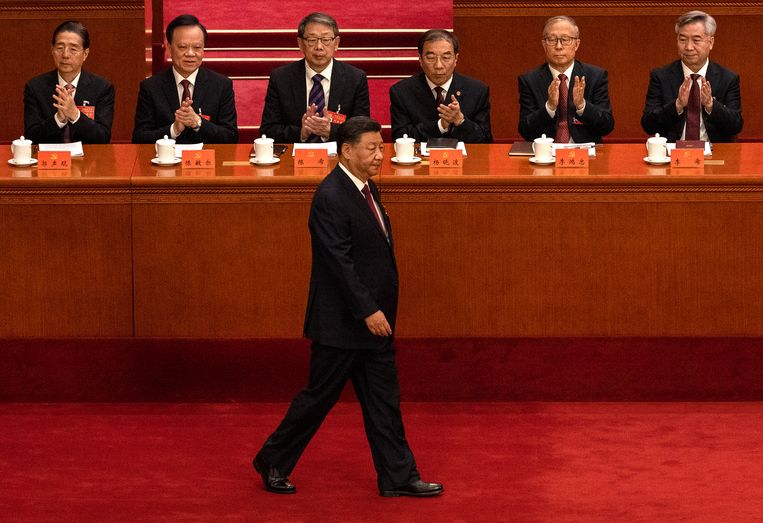 Xi Jinping seizes the Chinese Party Congress to increase his power. Part of the plan is to embed Xi’s ideology more firmly in the party constitution. This begs the question: What does this ideology actually mean?

Of all the ways Chinese leader Xi Jinping plans to increase his power at this week’s party convention, this is perhaps the most extraordinary: Party delegates vote – if analysts’ estimates are correct – to delete nine words from the party constitution. They wish to reduce Xi’s official ideology – “Xi Jinping Thinking of Socialism with Chinese Characteristics for a New Era” – to simply “Xi Jinping Thinking”.

Nine more or less words can make a big difference in the Chinese Communist Party (CCP). If the short but powerful “Xi Jinping Thought” was added to the party constitution, Xi would end up with the legendary rank of Karl Marx, Mao Zedong and Deng Xiaoping. They all have an ideology of exactly five figures in the party constitution. The five-character name elevates Xi’s thinking, from the point of view of the Chinese Communist Party, to the ideology of eternity.

This is very important to Xi, he constantly insists on ideology. In China, students from elementary school to university are taught Xi Jinping Thinking, party members have to memorize a list of 100 questions and answers about his ideas, and even private companies hire ideologists to avoid political mistakes in their communications. Xi Jinping thought professionals are in such great demand that schools and companies offer high salaries and bonuses.

This is a stark difference from the period before Xi took office, in 2012, when the Chinese Communist Party placed a heavy emphasis on economic performance, and ideology faded more and more into the background. The People’s Republic of China was communist in name, but in fact it has become more and more capitalist since the 1980s, under the slogan “Socialism with Chinese Characteristics”. The CPC remained an authoritarian party, but it ruled more pragmatically than ideologically.

Under Xi, this development was reversed. In his work report, which he read a summary of at the opening of the party congress, he criticized the ideological decline before taking office. It stated that “some party members and officials fluctuated in their political convictions,” followed by all kinds of calls for pure reflection. “Ideological work is about shaping the character of the country and the spirit of the nation.”

But for any very present ideology, it remains remarkably vague than what Shi’s thinking actually entails. Xi himself spoke of adapting Marxism to Chinese conditions. Analysts are divided: some see Xi’s teachings as a mixture of Marxism and the conservative values ​​of Confucianism, others see Xi vacillating between capitalism and communism as suits him, and others describe him as primarily nationalist. Shi looks like an ideological chameleon.

Shi described his thoughts at length in his book rule china. Four volumes of these have since been published, together over 2,500 pages. It has been translated into 35 languages, most recently into Icelandic, but not into Dutch. Millions of copies have been sold, but no one seems to have read it. It seems intended primarily to show and signify subtlety, as a contemporary change in Mao’s image.

According to Chinese politicians, Xi’s books are a genius. It contains “original strategies and tactics,” “important ideas and initiatives,” and “contributes to Chinese wisdom,” the foreign minister said after a recent seminar on Xi Jinping Thought. In the press release, he described Xi’s ideas as objective, honest, creative, courageous, scientific, methodical, practical and goal-oriented. But about the content of those thoughts: not a word.

Western China experts have a different opinion. I read Bethany Allen Ebrahimi books Foreign Policy We called them “a mixture of vague CCP jargon, gentle generalizations, and all-knowing father’s advice to the world.” Kevin Carrico took an online course in Xi Jinping Thinking at Tsinghua’s top university and mostly heard “Blank Hymn to Xi”. His summary of the course: “The thought of Xi Jinping is the greatest invention since slicing bread.”

At the same time, Chinese experts caution against seeing Xi’s ideology not as an empty box, but as an incredibly ambitious vision. They infer this not from his words, but from his politics: which radiates a mixture of state capitalism, nationalism and authoritarianism.

Xi’s economic thinking is the most ambiguous. He says he regularly supports private entrepreneurs and foreign investors, but at the same time he cheers on Marx and the redistribution of wealth. Last year, he sharply cut the technology and real estate sector, but at the same time he wants to boost innovation. The common denominator in Xi’s economic interventions: The private sector is allowed to thrive, but only if it aligns with the party.

Christopher Johnson, a former CIA analyst, said that Xi advocates neither communism nor capitalism, but a hybrid system. Xi does not want a contradiction between the private and government sectors, but rather a kind of giant intersection that unites the private and public sectors, is efficient, profitable and innovative, but is also sensitive to state control and government priorities. Whether such a model is feasible is open to debate, but Xi appears determined to try it. I call it Shi’s big gamble.”

Nationalism is the cornerstone of Xi’s policy. He constantly insists on his ambition to make China great and powerful, with a central role on the world stage. With China’s economic growth faltering, that nationalism appears to be becoming more important. Xi increasingly assumes the Chinese model as an example to the rest of the world. In his work report, he says that by 2049, China should “lead the world in terms of national strength and international influence”.

The pinnacle of Xi’s ideology is authoritarianism, which leans heavily toward totalitarianism. From a collective leadership, under Xi, the Chinese Communist Party has evolved into a single leader above the rest, who can last a lifetime and does not tolerate any criticism. It imposes unity of thought with propaganda and censorship, and goes so far that many ordinary Chinese do not even dare say positive things about Xi out of fear that something might go wrong.

This authoritarianism explains the ambiguity surrounding Xi’s ideology. His texts are not intended to be analyzed or interpreted, but only to be repeated and praised literally, for the greater honor and glory of Xi. In the end, this is the crux of his ideology: Shi is always right, even if it’s not clear what he’s saying.


At the 20th Party Congress, to be held this week in Beijing, the revision of the Party Constitution, the basic document of the Communist Party of China, was announced. Nothing was announced about the content, which usually follows the end of the conference. Analysts anticipate three possible changes, all aimed at bolstering Xi’s strength.

The two abide
Judging by the number of references in the Chinese state media, there is a good chance that the formula of the “reformers” will enter the party constitution. “Two Commitments” is a concept that embodies (1) Xi’s status as the core of the Chinese Communist Party and (2) the leading role of Xi Jinping Thought. While this sounds very contrived to outsiders, it gives the CCP a wonderful additional authority. According to experts, inclusion in the party constitution increases Xi’s chances of staying in power for life.

CCP often works with additions in its speech, such as the “three representations” or the “four universal elements”. This may stem from the origins of the party, which for a long time consisted mainly of illiterate peasants. Counting lines helped teach these peasants abstract ideas of politics. At the same time, fixed formulas are also very suitable for repetition as a talisman, which is useful for party indoctrination.

An abbreviation for Xi Jinping Thinking
Xi Jinping was given Ideology with his own name in the Party Constitution at the previous Party Congress in 2017, thus rising in stature above his predecessors Hu Jintao and Jiang Zemin. But it wasn’t until his ideology was shortened to a short five-character name that he reached the same level as Mao and Deng Xiaoping. This also gives him more power to rule for life.

New titles
In recent months, Xi has been referred to regularly as “the people’s leader” in state media, in a sign that the title will likely be formally awarded to him at this party congress. The title was also used for Mao, increasing Shi’s prestige. What is less certain is whether Xi will also receive the title of “Party Chief”, which also belongs to Mao and represents a greater power. Some experts believe that Xi does not need the presidential title, and is saving it for the upcoming Party Congress for now.