Groninger family stories of slavery in the Tschumi . ward 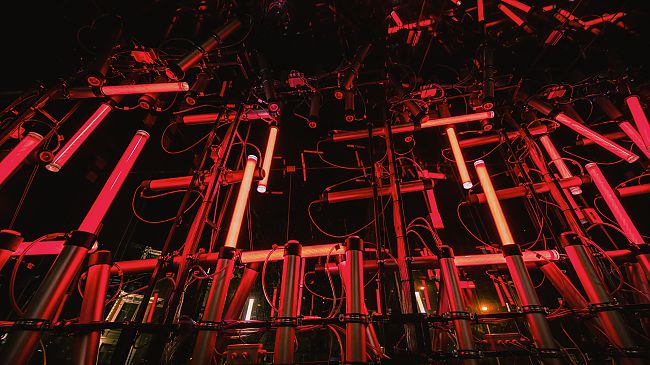 Anyone walking along the Hereplein will see a new presentation at the Tschumi Pavilion since Friday. Kunstpunt Groningen in winter programming a special version of the installation tight light by Lambert Camps. light on the past He shares personal stories of the Groningers about the impact of slavery’s past on their (family) lives.

Paula Lambek, Director of Kunstpunt: “Our people from Groningen also have a history of slavery. Our common past should command attention in all places. And also in Groningen.”

City poet Myron Hamming listens to four people talk about the impact of colonial history on their (family) lives. Inspired by their stories, he wrote four poems. Light artwork by Lambert Camps shows meaningful words from his poems from sunset. Poems alternate every two to three weeks. Kunstpunt begins the presentation series with an introduction based on Myron Hamming’s own story.

tight light The artist Lambert Camps is an installation that “writes” words with light tubes. LEDs slowly slide in and out of closed tubes. Lyrics from Myron Hamming’s poems are depicted in this way. The QR code in the artwork leads visitors to audio portions in which the city’s poet recites his poems and to the source, the Groningers’ stories about slavery’s past.

Preliminary investigation into past slavery

light on the past It is the first public expression of a preliminary study of how the visual arts can make the shared history of our slavery past visible in the public space. The research focuses in particular on a yet-to-be-erected monument commemorating Groningen’s slavery across the Atlantic and Asia, in a meaningful place in public space. Kunstpunt conducts this research on behalf of the municipality of Groningen and in cooperation with the organizations and individuals concerned.

See also  The school year has reached the halfway point: Leiden2022 is producing an overview video

Kunstpunt and Lambert Kamps have the art project light on the past It was developed to contribute to the collective awareness regarding this topic. Alderman Glimina Chakor (Inclusion and Emancipation): “It’s up to all of us to open our eyes, listen to other people’s stories, and start a conversation with each other. It’s a date we can’t undo, but we have to keep telling each other.”