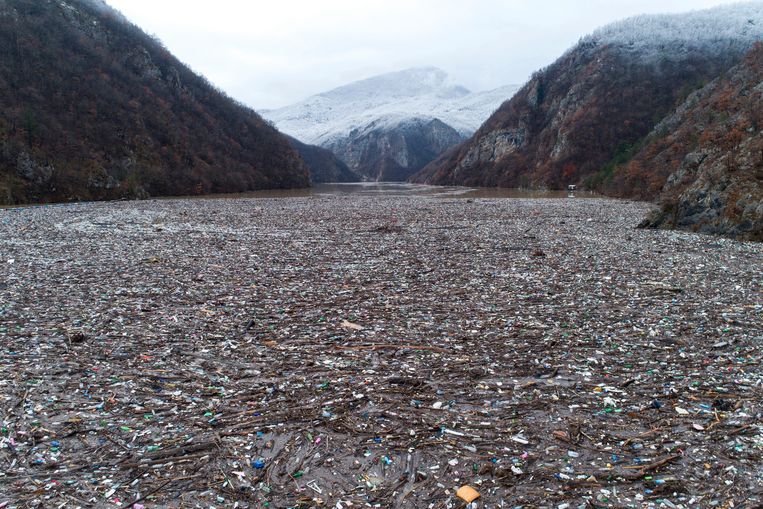 The Drina River is usually known for its emerald green colour. At 346 kilometers, it runs through the mountainous region of the Bosnian-Montenegro border, through eastern Bosnia and along the Bosnian-Serbian border to the north. A fisherman’s and rafter’s paradise, it was fondly described by writer Ivo Andrić.

However, drone photos released by the Associated Press on Saturday show a very different side of Drina. About 10,000 cubic meters of waste has accumulated behind a dike in the river near the Bosnian town of Visegrad. The water is littered with plastic bottles, rusty barrels, car tires and household appliances.

In winter and early spring, it usually rains heavily in the Drina Basin. These showers have been earlier and heavier than usual this year. And with water comes waste in Visegrad: on its way from the mountains, it flows through the area’s many illegal dumps, bringing rubbish collected there into the river.

“We’ve seen a lot of rain and flash floods in recent days, and a huge outpouring of water from Montenegro, which fortunately is now receding,” Dejan Furtola, a spokesman for a local environmental organization, told the Associated Press. “Unfortunately, the massive waste stream has not stopped.”

The combined waste management system of Montenegro, Serbia and Bosnia and Herzegovina in the river basin is very inefficient. Resources are in short supply, but the waste tax increase is unpopular. Local residents and waste handlers also dump their waste into the river themselves.

The barrier in Višegrad was built by the hydroelectric power station about 3 kilometers upstream from the city. After all, litter in the water is not only harmful to nature, but can also hinder the functioning of the plant.

Central and local residents’ employees remove from 6 to 8 thousand cubic meters of waste from the water every year, but this is far from enough to keep the river clean during the “garbage season”. The garbage they remove from the water also ends up in the municipal landfill. According to Furtula, it “doesn’t even have enough capacity to process municipal waste.” He described the situation as “not only an enormous environmental and health hazard, but also a source of great embarrassment to all of us”.