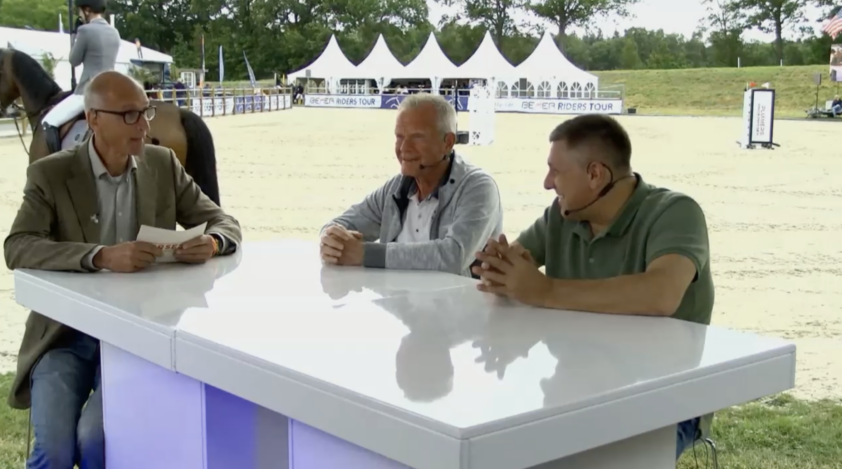 With a true National Trainer and one National Trainer, Horses Editor-in-Chief Dirk Willem Rousey looked forward to the World Championships at Herning this afternoon on the second episode of HorsesTV from CSI Ommen. The devil was in the tail of the broadcast: national team coach Alex van Selvhout indicated that he was eager for a medal for TeamNL staff and horse staff Marcel Dufour would put money on the Belgians, Swedes and … the Dutch in the national competition.

Van Silfhout discussed these options, along with photos of the groups that have grabbed attention this year: Dinja van Liere, Hermès, Emmelie Scholtens and Indian Rock, Marieke van der Putten with Tørvesletten’s Titanium and Thamar Zweistra with Hexagon’s Ich Weiss.

Van Silfhout points out that there is still hope that Glock’s Dream Boy (by Vivaldi) will fit in in time for Herning and also explains why. “In the early part of the season, I was a bit depressed by all the setbacks and the inconvenience,” says Van Sylvhout, noting, among other things, the retirement of Edward Gall (due to sabbatical) this year and Dreamboy injuries. and Desperado. “Then I really thought: We’re going to qualify for the games (place in the top 6 in the country ranking, editor).”

Meanwhile, with the season progressing further and us behind the Final Showdown (CHIO Aachen), Van Silfhout started itching a bit more and hinted at the thought of TeamNL’s medal. “Now it’s starting to be a little different.”

See also  Daniel Ricciardo candid about Netflix's campaign to survive: 'They just threw some oil on the fire'

Van Sylvhout points out the strong Danes, but there are still plenty of opportunities open. “You can see from Germany how fragile they are in the big sport, of course they can still put in a solid performance, but it looks really different from other years. Moreover, apart from two Lotties, the England team is completely stripped and the USA is also less strong. Much more than in other years. The influence of other countries is diminishing, while we are in fact in a good flow.”

Marcel Dufour appreciates the chances of the Dutch show jumpers very well. “I was going to put the money on the Belgians, the Swedes and the Dutch.”

When discussing potential groups on Jos Lansink’s team, it’s amazing how closely Dufour pursues showjumping. “With groups, I always look at the percentage of net rounds in the thicker courses from last year.” Maikel van der Vleuten owns a very good percentage of Beauville, as Dufour knows. He thinks Van der Vleuten can be confident of a place on the team, just like Harrie Smolders. “You can send a message to these guys.”

“With Harry, it is surprising that he can already ride four horses, although Monaco is the most visible. He is much better than the others.”

The other two places

As for Willem Greve, Dufour thinks he can prepare to take on Herning. “That horse jumped three times in the Nations Cup: Rome, Rotterdam and Noki yesterday. Few horses in the world can show such results. And the Nations Cup in Rome is one of the toughest in the world, you can compare it with Spruce Meadows and Aachen.”

See also  Complaints about BBC programming after Philip's death amounted to more than 100,000

“Sanne Thijssen with Con Quidam also has an impressive record, averaging two fouls at the highest level. That means 0 and 4 in the Nations Cup.”

As for Houtzager and Dante, Dufour has to admit that he’s often seen this combination with his buttocks squeezed. “She always manages to get through it, but in the meantime it has gone so well so many times that the stress is also less.”

Finally, Dufour thinks Jur Vrieling peaked a bit early this season with Long John Silver: “He jumped really nicely early in the season, and now he’s a little lower lately. I wouldn’t call it a form crunch, but the form hasn’t been around for a while. Than I have to say that in Aachen – until he fell – he really jumped out of the book. He’s also only ten years old of course and I think he’s a wonderful horse.”

Finally, Dirk Willem Rosie can reveal that the Horses.nl and ClipMyHorse.tv team are working on Studio Herning. With three special editions of HorsesTV, we bring all the highlights from Herning to the Netherlands.