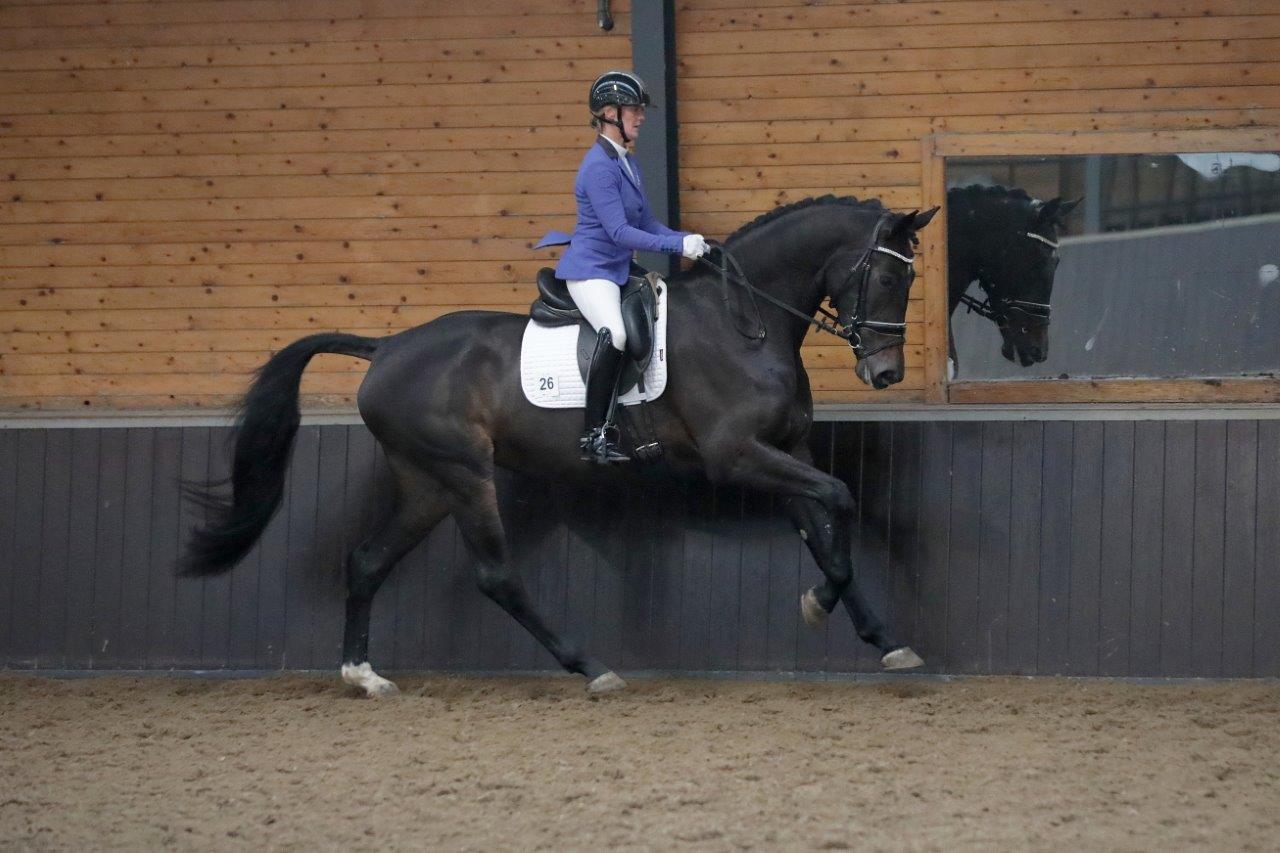 Bart Backes and Marianne Dorestijn evaluated 22 mares today. With two mares who had to stop the evaluation, 15 mares passed. “We saw a good leading group, great midrange and a little bottom end,” Bart Bucks is pleased. “It was amazing that all the horses were presented so correctly and accurately. They were moved so well from back to front to hand. We had a good day, everything went well on schedule and we were able to assess all the horses very well.” A large number of mares were subsequently declared IBOP. “Many owners have their manes pulled immediately for a D-OC test, so these mares can become more elite.”

There is no DJoke B

La Djouk b (Iconic B from Djoke B Elite-dres IBOP-dres PROK from Stedinger, Breeder Marcel Sternborg from Leende and AJBM Fiévez from Leende) by NG Fransen – van Driel from Deest scored only 8.5. “This was a well-running mare who had a lot of rest in her movement. She paced briskly with good use of the body and good space. The trot has plenty of momentum and power, with good reach. At the gallop we saw the same thing with a good jump and good lunge. At this point, There was still some difference between the left and right cans, otherwise the number would have been a bit higher.” With 80 points for morphology, No Djoke B is included in the genealogy book and poster.

See also  Public place notifications from now on with Fixi

Olympia VDT (Romanov Blue Horses from Velvet VDT Elite Pre perst D-OC by Ferro) from the breeder Ad van de Tillaart from Zijtaart she scored 9 points for her trotting, slyness and suppleness. This mare previously had a score greater than 90/85 in a thoroughbred history check. “This mare also had a lot of charisma and a lovely silhouette under saddle. She was presented in a very natural way. The flexibility, spring and balance of the gait were positive. She walks briskly with a good four stroke, but could have more room in her. Artful trot with good suppleness, And her carry is good, and she has good use of the back leg. She’s a good tackler on the three strokes, is light-footed and has a great deal of balance.”

Desperado’s daughter Lavanori (from Tanzereen Elite favorite PROK by Florestan I) from breeder Adri van Erp of Heesch and scored 84 points with 9 points for walking and riding. “This mare walks with a lot of body use and a lot of range. She carries herself well with good technique and can lock easily. It has been seen that this mare trots better in training. In the gallop she has a good jump and lunge, but for a higher mark , She could go off a little more with the withers up. She was very practical and very obedient.”

Suggested by Anuk Ivets One to remember (Just Wimphof from Iris ster IBOP-dres sport-dres from Lord Leatherdale) from breeder LPL Martens. With his dam One To Remember, the jockey recently made his first successful appearance on the Big Tour. “This is a mare of great articulation and a great deal of gait technique. She showed good balance in transitions. She walks with good use of body, but should have more room for a higher mark. At the trot, her lightness of foot was noticeable, as well as good leg technique and balance at A tight neck. The trotter has a lot of jump, a lot of lunge and good technique. Both in the stretch and in the back, I kept running very well with the withers up.” One To Remember scored 82 points for her IBOP, with 75 points for formation which is included in the Ækeur Genealogy Book.

Gandy’s daughter Olivia (from Slinker Brigade Sports from Jazz, Breeder: CJCM Otter from The Shot) owned by CWM Otter of Harstig had an 81 point. “This is a hardworking mare with a lot of balance and a lot of stance. She strides with a good stroke with good range, but could have more body use. This mare trot with good technique, good use of the hind leg and good balance. For a higher mark she was allowed to stay With the withers a little higher. We’ve seen the same picture at the gallop, where she has a good jump, lunge and range.” With a top beam score of 80/80, this mare is included in the Elite and Gentlemen’s Book.