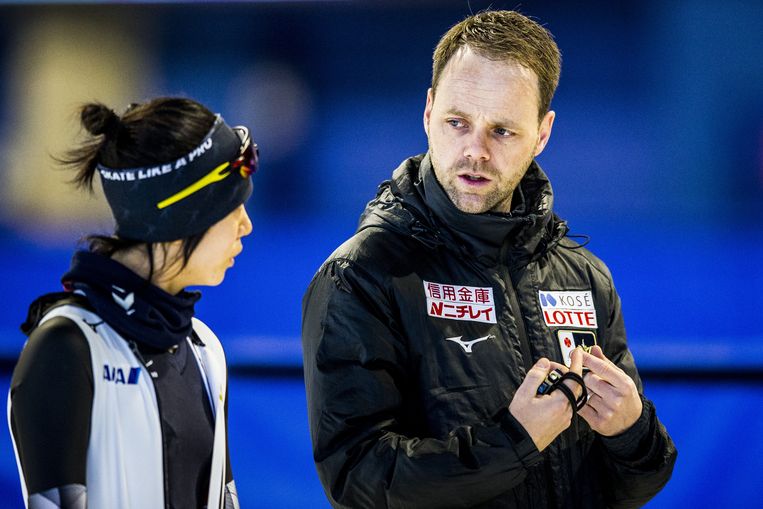 Johan de Witt has only one problem: he sometimes gets a little bored. As the national coach of Japan, he is used to a group of more than twenty skaters, this season he has only one under his wing. Olympic champion Miho Takagi is not the least, but the pupil is not enough for the Dutch coach.

“During competitions, I wait all day for two minutes,” says North Hollander, smiling from the car from Leeuwarden. “I have a little trouble with that, in those moments I’d like to do more.”

Takagi is sitting next to him in the car. The two had recently been training on the rink at Elfstedenhal in the Frisian capital in the run-up to their first World Cup of the year. In Stavanger, Norway, Takagi finished third in the 500m on Friday, the distance at which she won the Olympic silver in Beijing. On Saturday she will run the 1500m (also silver) and on Sunday she will run the 1000m, which brought her the gold medal in the last games.

Training, participation in the World Cup, which is still similar to past years, but now everything is different. Step by step they are trying to build a new skateboarding team around Takagi. “Now we’re thinking of six to eight skaters,” says de Witt. Maybe more in the future, but it’s also about proper installation. Skaters who can train together and above all want to become the best in the world. This is all for us.

Takagi, 28, knocked on the door of her old coach in June, who had bid farewell to the Japanese team after seven years. The skaters won nine Olympic medals at that time, three gold, and five world titles, but the federation did not want to continue with him and also wanted to be in the Netherlands more. After the games, Takagi first had to think about whether she wanted to continue. She wanted it, but with her trusted coach.

“We started very late in the year,” says de Witt, 43. “Other interesting drivers who already have a team. That’s why we chose to start like this, we’re trying to expand it slowly.

A physiotherapist and sports scientist were arranged and a sponsor was found. Dutch outpost and recruitment agent Proud People finance facilities and accommodation in Europe. “These are costs Miho doesn’t have to incur,” says de Witt. Because that’s how it is: Most of it’s coming out of Takajis’ pocket right now. The former all-round world champ and sprinter can do it because she has many individual sponsors, but it’s not her intention to keep pushing on her own.

“We are in a very good position,” De Wit explains. But this money must remain in her own bank account. Not one person has to pay for the entire shift, but it does take time to get it done.

De Wit and Takagi hope to get a main sponsor and are discussing this. Even if that doesn’t work, the Dutchman sees opportunities. The Japanese skaters he thinks of all work with individual sponsors. “They have a monthly income,” he explains. “We can always say: Everyone keeps their care and contributes something.”

Skiers from other countries are also welcome. With Takagi there, it’s only natural that the team will be in Japan for part of the year. “It shouldn’t be that we sit there a lot and have the Dutchman who should lead all the selection competitions here.”

The goal is to create a “common base” between Japan and the Netherlands, so that De Wit can spend more time with his family in Bergen, northern Holland. This year, a large part of the preparations were made here, as they were not able to train in Thialf, because the Dutch teams are given priority there. “We just have to wait until the last minute to see if there is a place available,” the coach says. “Of course we don’t want that.”

He does not complain about it, he understands that with so many good skiers in the Netherlands, there must be such a system. “It’s bad for us, but fortunately we can train well in Leeuwarden. The atmosphere is very friendly and the ice cream is very good. I don’t have to train in Thialf, I just want to train well.”

Takagi is also fine. He knew they had a good relationship, but now they are more dependent on each other. I’ve been a bit hesitant about that, but we can get along really well with and without each other, so that’s okay. Only on match days, it’s still a bit boring.”