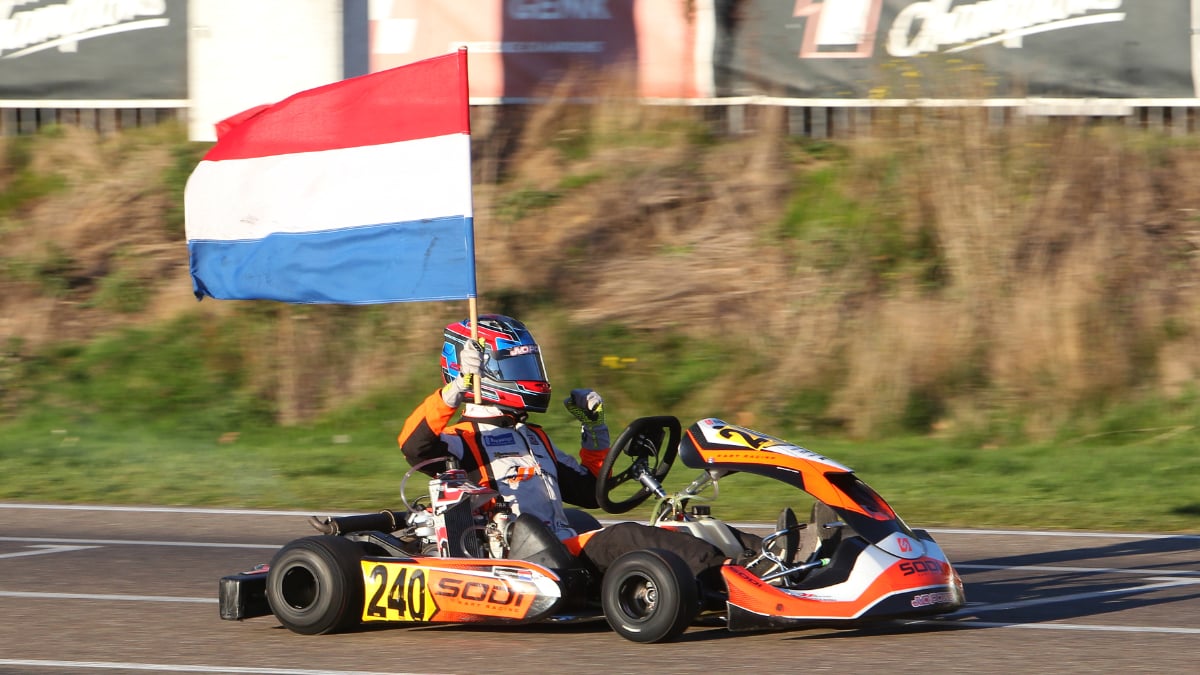 Thirteen-year-old Carter crowned himself champion and junior champion in Genk by three points. The difference said a lot about the fierce battle that was fought. It also explained, of course, why he was so frantic with joy.

“It’s not really normal. There’s a lot going on in my mind!” Kasper said jubilantly at the Parc Ferme in Genk, while being constantly congratulated by competitors and teammates. “The race felt very long. The top eight rode together for thirteen minutes straight. If overtaking isn’t done well, you can completely fall behind.”

It happened to Casper, who started second after the second place in the semi-finals and, unfortunately, also in first place. “But then I was able to fight my way back to the front. In the end I managed to finish second. I’m very happy about that! Really not normal.”

“It would have been ideal if I had won before the final, but it didn’t work out. The person I’m fighting with in the tournament won it. The difference was six points. In fact, all I had to do was finish in the top three if he won and that happened in the end.”

So it was a make or break for Casper this weekend. The JJ Racing team rider had already taken several podium positions in the Rotax Max classes, won races, and had never been a Dutch champion. Therefore, for him, a lot depended on the last race. Now it had to happen.

See also  Verstappen: Everyone in F1 is a bit hypocritical

“I wasn’t really nervous though. Of course I already had a ticket to the Grand Finals. The fact that I’m now a champion is of course even better,” he said. It was a great finish to the regular season which was also consistently ahead in the European Championship, BNL Championship and BMC Championship. And in the German championship he still finished fifth, although he lost the race in that battle for the title.

“This season has been so good, and that. There are so many emotions going through you,” he repeated. “At first you think you’re not going to make it, then all of a sudden you do and the finish flag drops. Really unbelievable. This is my first Dutch title, great!”

How did he explain that he managed to take the crown this year? “I rode stronger. I also trained better, both in kart and in the gym. And it helped of course that I raced against the top of Europe.”

Now he can prepare for the best dessert of the season, the Grand Finals, which start next Sunday in Portimao, Portugal. Needless to say, Kasper is eagerly awaiting the annual unofficial World Championship for Rotax Max drivers. “But now let’s celebrate!”

Casper thanks Jaco Van Dijk, Jeffrey Grothuis, Bastian Hummel and the others from JJ Racing.