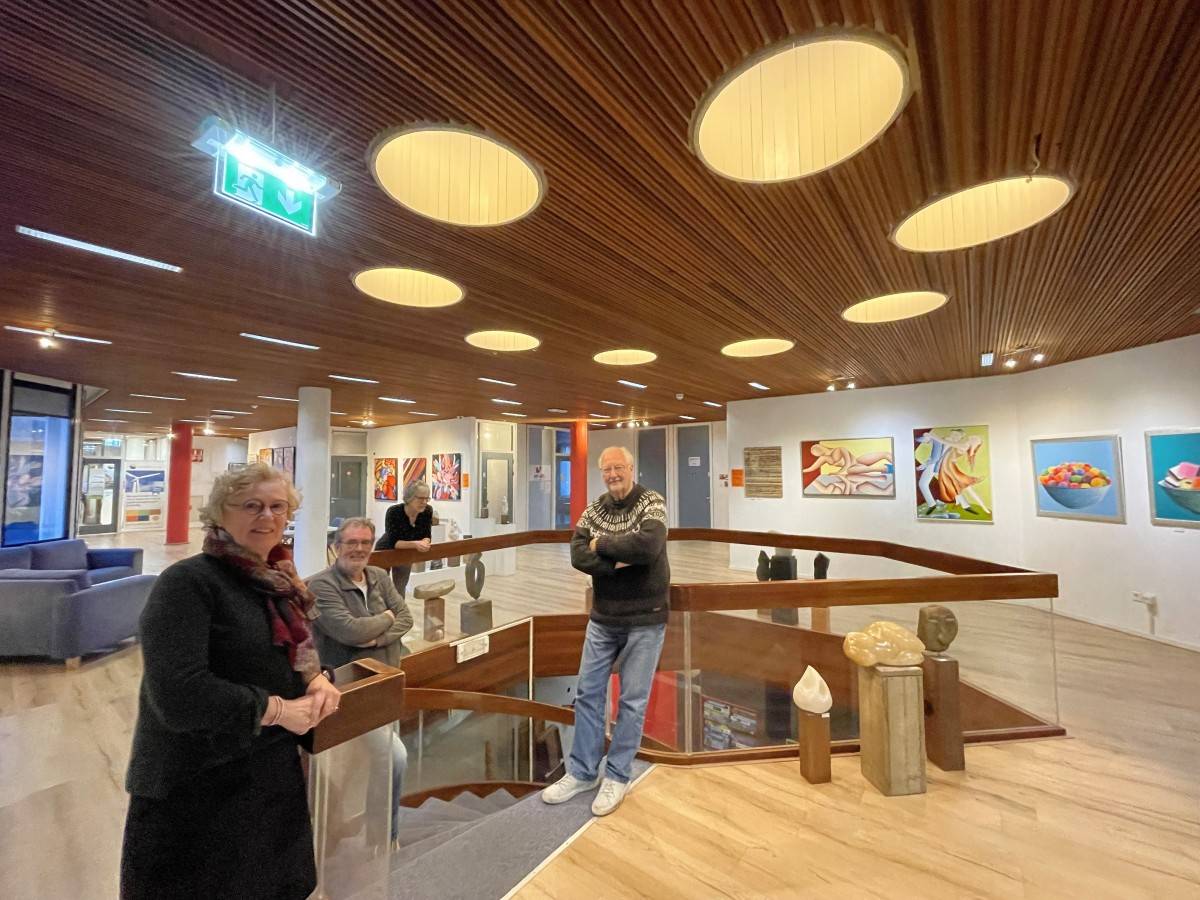 LOCHEM – Four passionate art lovers have put their heads together to take Het Stadshuus’ art galleries to the next level. The Arts Commission wants to present exciting exhibitions. They can loosen their tongues. From now on, the open space on the top floor of Het Stadshuus will be the workplace.

With an exercise of the fingers, a temporary exhibition of local artists Willi Alfrink and Wim Leussink is currently being created. This showed that the space is ideal for displaying art. Plenty of space on the wall, but also space to display pictures, sculptures or fixtures.

Stadshuus had an art committee before, but it collapsed. Only Finette Bönkers remains. I went looking for “supporters” and found them in people from Hanki Juma, Luis Spoelstra, and Henk Smits. They all have their own vast network, from different backgrounds, such as cinema and interior design. Of course, everyone has an affinity for art.

The large room on the first floor is always available. Until now, exhibitions were often held in Molenzale’s basement. But this space is also used for other purposes. As a result, only the walls were available. Nothing was allowed on the ground. “Upstairs we can make beautiful compositions with paintings and sculptures,” says Finity Bonkers. Henk Smits adds: “We like to use the walls and the floor together. Sometimes this is possible with work by the same artist, but sometimes combinations are made to make optimal use of space.

The idea is mainly to offer up-and-coming artists from Achterhoek exhibition opportunities, although the geographical delineation is not very strict. There is a search for a good level. and private art. “Art should surprise. It may loosen tongues,” says Henk Smits. It also aims to make the context of the art shown clear to visitors. With brief explanations of each work and also via videos projected on a large screen. Louis Spoelstra is a professional filmmaker and can produce Videos like this.” I’m retired. I can sit on the couch with a puzzle book, but making myself useful that way is so much more fun,” he says.

Henk Smits is an interior designer and has worked on galleries, among others. So he has contacts in the art world. Including through the Keep an Eye Foundation, which provides theater for young artists. They often fall into a black hole after their technical education. By the way, Keep an Eye is a deliberate “corner” of chicken and eggs.

Hanneke Gouma has been working at Gudula Cultural for some time and is good at communicating. Together, the quartet believes they can make a difference in Het Stadshuus in the near future, as far as art is concerned. Collaboration with other parties is also being sought, such as the Stichting Kunst in Lochem (SKIL). This basis is known, among other things, as the annual constrote. The intention is that a different exhibition can be seen every four to six weeks at Het Stadshuus.

Lochem is home to a lot of talent, as the committee discovers time and time again. For example, preparations are underway to show Cor van Wees’ work. He lives in Lochem and is the designer of many posters for the popular Pinkpop festival. An exhibition by Lokem photographer Lex Van Drog is also planned. But first there is room for the works of brain-damaged artists. More on that in the post below:

Art of people with brain abnormalities

NAH stands for acquired brain injury. This does not stand in the way of creativity, as explained by the people involved in the NAH Atelier, which is part of the Zutphen Activities Center. Under the title “Art with a Story”, the work of 20 participants will be presented from February. This leads to an exhibition of very diverse works.

These are people who have suffered a traumatic brain injury at a later age. Many had not practiced any form of art before they were affected by it. For them, drawing is a way to discover their personal potential. It helps in the process of processing, acceptance and restoring self-confidence.

The context becomes clear through the stories the artists write with their work. The image and text complement each other and together tell the story of life after a brain injury.

The exhibition can be viewed from the beginning of February and can be accessed during Het Stadshuus opening hours. For more information, visit stadhuuslochem.nl.