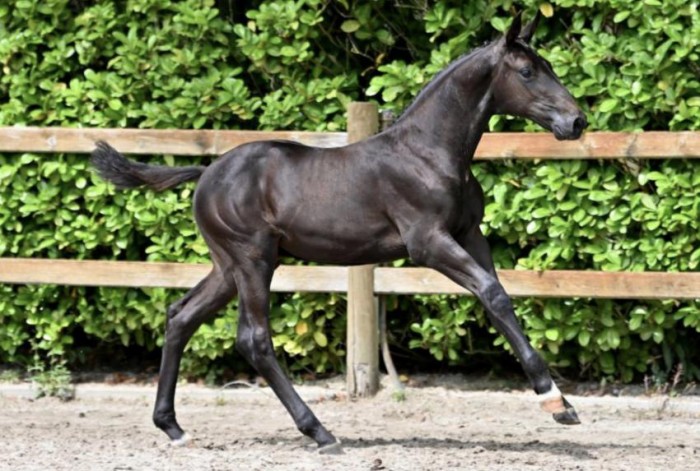 Despite the fact that the Weather Gods weren’t in Foal Auction 111’s favour in the least, the organization can look back on a fantastic release in which all records were once again broken!

The pinnacle of the evening auction was the impressive El Patron XS Z, a “our” El Barone 111 Z colt out of a 1.60 Chacco Blue mare Briljant. He was defeated for 36,000 euros and moved to the Stables of Kines-Saint. The second highest was paid for Emerald mare Emely vd Berghoeve and will move to the UK for €28,000. The third was paid for Cornet Cornett’s son Idol, a colt from Idol 111, the full sister of “Our” Fingingwood. He succumbed to the proverbial hammer for €27,000 and stayed in Belgium.

The fetuses were also very hungry. An Aganix embryo from the famous GP mare Gatoucha van ‘t Roosakker was sold for €27,000 to L&M Sporthorses. And, as usual, Chacco Blue won big prizes: the most expensive embryo of the three sets made by this first predecessor was paid for 22,000 euros and will remain in our country.

With an average of just under 16,000 euros, we can look back with great satisfaction on a more than successful version. There are buyers from 12 countries with extreme values ​​of 4 dowry who left for Sweden and 3 move to Ukraine. With 39 sold out of 41 contracts offered, we continue the streak of previous issues.

This result gives a lot of confidence to us Online Pony Auction www.onlineauction111.com which ends the following Tuesday, August 31 at 8:00 PM. We would like to thank everyone who helped make this seventh edition a huge success. “Through the wind, through the rain, through everything…”. In particular, our regular and new customers, to whom we wish good luck with their purchases! And of course also our breeders who entrust us with their breeding products, which makes it possible for us to compile such a beautiful selection.