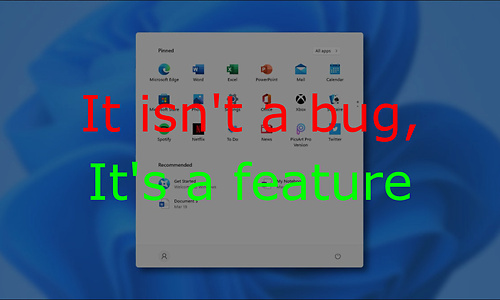 The optional update KB5010414 brought a new media player and notepad apps to Windows 11, among other things. It now appears that modifications to the taskbar are closing the Start menu for many users. If it is opened by clicking on it, it will close again when the cursor is near the widget icon on the taskbar. This strange behavior is intended as part of the recently added scroll functionality, according to Microsoft.

The error that is actually an advantage occurs only when the start menu is placed on the left, in the standard layout these elements do not overlap each other. One possible solution is to hide the widget icon, after which the window can be opened with Win + W.

Microsoft is working on this, but says in a statement that users should move the mouse with caution to avoid this behavior for the time being. Although this behavior was intentional, according to Microsoft, there have been more problems with the taskbar since the update. Apps like Chrome, Edge, and Teams cover the taskbar when it’s maximized, while Office apps partially hide behind the bottom bar.