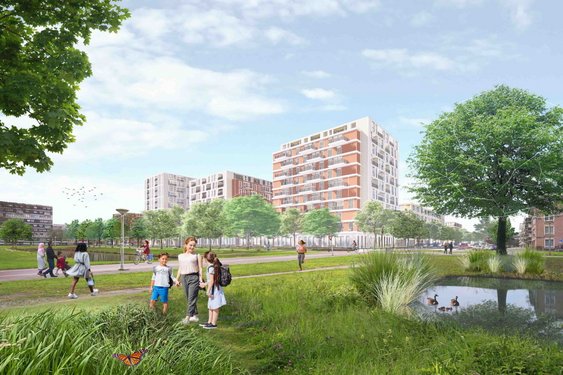 AMSTERDAM – Stadgenoot housing and care party Amstelring and the municipality want to replace the old residential care center De Venser with a new building with space for 300 care and housing for the elderly, add 550 homes and renovate public spaces. There will be improved cycling and walking paths and a lively plaza. There will also be plenty of space for amenities, such as the neighborhood room and small businesses. The plans place great importance on sustainability: there will be green roofs, solar panels, and rainwater harvesting and reuse. Amsterdam residents will be able to respond to the plans from mid-May.

Alderman Marieke van Doorninck (Spatial Development and Sustainability): “After more than 40 years, the care center no longer meets today’s requirements. Together with Stadgenoot, we are using new construction to build many additional homes, which are often affordable…, and renovate the neighborhood and make it more sustainable.”

Stadgenoot Chairman Anne Wilbers endorses this and sees a bright future for the neighborhood: “We want to make the neighborhood accessible and attractive to everyone. For people who already live there, people who want to move within the neighborhood and people who haven’t moved there yet. In the coming years, we will be adding many more homes. On the existing and new sites, mostly social rent houses, but we are also adding houses in other sectors in order to stimulate the flow of people, thus contributing to solving the housing shortage and helping to keep Amsterdam habitable for diverse groups of people.”

Together with the neighborhood
Prior to De Venser’s demolition, Stadgenoot will build a new residential care center in two phases. For example, current residents who wish to live in De Nieuwe Venser can move once, without having to live temporarily elsewhere. Neighborhood residents and the Parents Committee participate in drawing up the plans, and the plans have been changed in response to their wishes and observations. For example, a number of apartment blocks have been moved and the new building will be lower in different locations than intended in the original design. This way, locals retain more views and privacy.

The new neighborhood will be green with improved cycling and walking paths and places for sports and relaxation, such as fitness equipment and seating and play areas. In addition, there will be a new vibrant square: a central meeting place. The streets around De Venser will also be improved, with more green space and more bike space, so that the new neighborhood and the neighborhood around it are better connected. In addition, there will be “nature-friendly banks”. They gradually descend from land to water, which is beneficial for plants and animals.

Sustainability is fundamental to new construction and public spaces. Solar panels will be installed on a number of roofs, collecting rainwater and reusing it. There will also be plenty of green space on the roofs and between buildings. This provides cooling on hot days. The heating source for the new building will be natural gas-free.

The consultations will take place from mid-May to the end of June. The final plan will then be drawn up and submitted to the city council. The first construction and demolition work will start at the end of 2023 at the earliest, and work will be completed between 2028 and 2030.