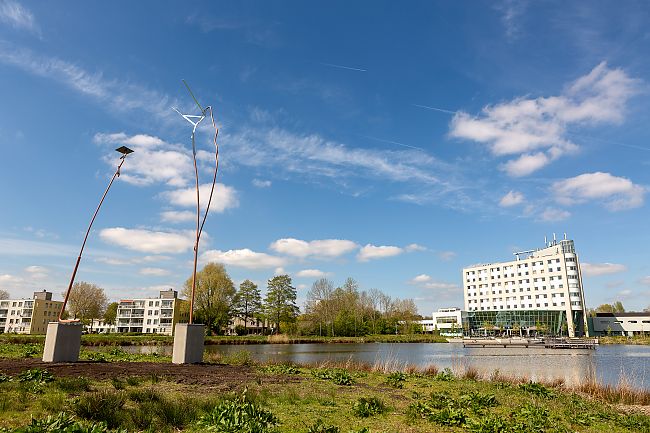 The artwork Untitled (1990) by Auke de Vries returned after restoration. The two 9- and 11-meter-high steel statues have been given a new location and are now on Nonnengat Island in Hoornsemeer near the Best Western Plus Hotel Groningen Plaza (formerly the Hampshire Hotel).

Artwork removed and restored due to Hoornsemeer’s expansion. Previously, the artwork stood next to Meerwold. The work was shipped and assembled within two days at the new location, in the presence of the artist, who came to Groningen especially from his hometown in The Hague. Transport is a collaboration between Kunstpunt Groningen and Stadsbeheer. Together they manage and maintain a large part of the art in public spaces in the municipality of Groningen.

The artwork was created in 1990 and was part of the Paleistuin Gallery – Sculpture Garden in the garden of the Peace Palace, The Hague that summer. Auke de Vries then described the two statues as “figures of archaeological value”. According to him, they mention the visual language of ancient Egypt: “Those long stakes with feathers on them. There is something in it ritual.”

In 1992, the artwork was given a permanent place in the new KPN Meerwold Training Center (now a restaurant). In 2021, KPN donated the statue to the municipality of Groningen and a new site was found in close consultation with the artist. Kunstpunt Groningen and Stadsbeheer teamed up with Meerschap Paterswolde for this transfer.

Auke de Vries (1937) has been working as a painter, illustrator and illustrator since the early 1950s. He’s been making metal sculptures since the 1970s. His sculptures are light, abstract structures made up of geometric shapes that appear to float: lines, cones, cubes, cylinders, and surfaces. It allows his images to instantly match the architecture.

De Vries designed dozens of sculptures for public spaces. One of the most famous examples is the two-hundred-meter diamond statue along the Nieuwe Willemsbrug in Rotterdam. This artwork consists of separate elements suspended in the air in an ingenious manner. Another well-known work by De Vries is Holland, Land aan de Zee, which “floats” in the lobby of the Houses of Parliament. Auke de Vries has received many awards for his extensive work.