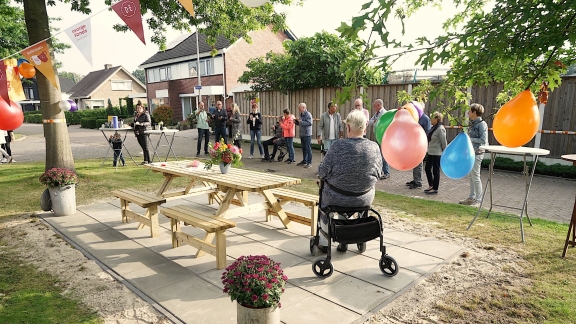 DINKELAND – In Dinkland Municipality, National Neighbors’ Day was well-responded on Saturday 25th September with flags, balloons and a wild effort.

Each year is a great opportunity for many street and neighborhood residents to put Noabership into practice; For example by performing maintenance or starting a new project.

Early Saturday morning there was a lot of activity on the lawn at Akkermaten in Denekamp and the last balloons were inflated. Alderman Ben Blokhis came at ten o’clock to fix him on the table. There was a friendly atmosphere and the locals enjoyed the pastries. This delicacy was served by Alfons Hottenhuis (Public Liaison).
“Not only is the bench set up in our neighborhood but other residents are also allowed to use the bench, it brings more neighborhood convenience,” says local Alphonse Berning.

The meeting place is important

Alderman Ben Blokhis also finds a new meeting place very important: “Good communication with your neighbors is so much fun. It’s the little things that matter. Think, for example, about the children playing together or the neighbors putting your Otto on the street while you are on vacation. Last year We had to stay at home most of the time. As a result, contact with neighbors proved to be an added value to many local residents. So we would like to think with our residents about how to design public spaces in a way that contributes to solidarity.”

Jan Bucher and Alphonse Hotenheus support residents in designing their district or neighbourhood. “The neighborhood didn’t come together in Denkamp,” says Jan Bucher. An overview of all initiatives in the municipality of Dinkelland can be found at www.burendag.nl.

Anyone who wants to get involved in the neighborhood doesn’t have to wait for National Neighbors Day. For more information about what people can do in their own environment, you can contact your public contacts by phone at 0541 854100.