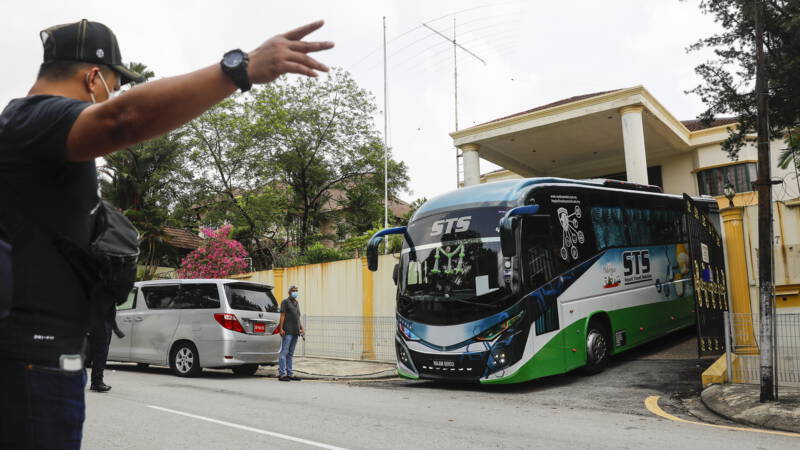 North Korea closed its embassy in Malaysia and took all of its diplomats home. The two countries are locked in a diplomatic row over a North Korean handover to the United States.

Pyongyang cut all diplomatic ties with Malaysia last week. Then the Kuala Lumpur government ordered the North Korean diplomats to leave the country for 48 hours.

Today, the North Korean flag was lowered at the embassy and its name plate removed. Then two buses with the staff and their families left for the airport.

“The greatness of the enemy’s law”

Last week, Malaysia extradited a North Korean citizen who had lived in the country for years to the United States. He was arrested in 2019 for allegedly violating the international trade embargo imposed on the regime by supplying luxury goods to his country of origin.

North Korea called the allegations “ridiculous lies” and swears the United States will pay for them. It accuses Malaysia of committing a “colossal act of hostility” and speaks of a “conspiracy between the American enemy and the enslavement of Malaysia to isolate and strangle our country.”

A half-brother was killed

Malaysia stressed that an independent judge had agreed to the extradition, describing North Korea’s response as “hostile and unfounded.” Since the country has been in diplomatic quarrels with North Korea since 2017, there are no more embassy personnel to withdraw from Pyongyang.

In 2017, the half-brother of North Korean leader Kim Jong Un was killed at Kuala Lumpur Airport. Because the Korean regime is responsible for this, Malaysia has put diplomatic relations in a bind.