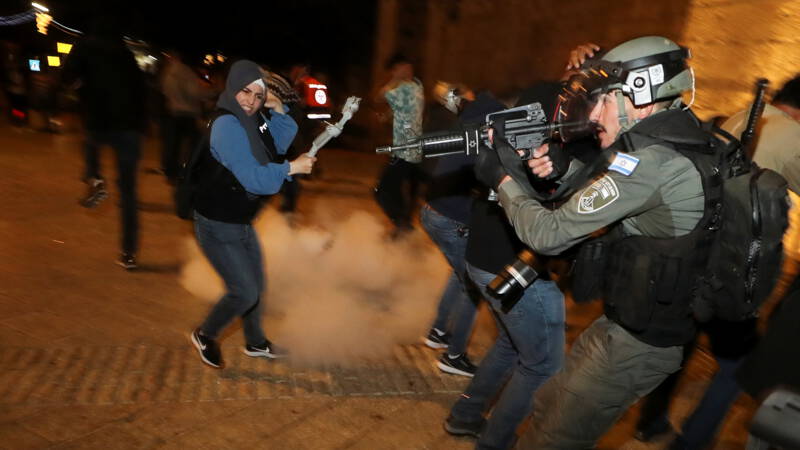 Riots broke out again tonight between the Israeli police and Palestinians in the Old City of Jerusalem. At least six Palestinians were injured in the riots. And the occupation police arrested ten Palestinians. Three Israeli agents were also injured.

Palestinians also clashed with Israeli police elsewhere in the West Bank. About a hundred Palestinians threw stones and Molotov cocktails at the Qalandia checkpoint near Ramallah. In Nablus, five Palestinians were injured by tear gas and rubber bullets fired by the Israeli police.

Since the start of Ramadan on April 13th, the weather has been turbulent in Jerusalem. The Palestinians are angry at the small number of people allowed to pray on the Temple Mount. Because of the aura measures, there may only be 10,000. The stairs around the column door are closed. Usually this is an important meeting place for Palestinians during Ramadan.

On Thursday, far-right Jewish protesters moved in Jerusalem. And chanted slogans like “Death to the Arabs!” The reason was because there was a video on TikTok showing how Palestinians beat and harass random Jews. During the riots Thursday Dozens were wounded, most of them on the Palestinian side.

As a protest in Gaza

A day later, things became turbulent in Gaza. Dozens of rockets were fired at Israel, and the army responded with few explosions in Gaza. The Al Aqsa Martyrs Brigades and the Popular Front for the Liberation of Palestine claimed responsibility for the attacks, and issued a statement referring to the situation in Jerusalem.

Rocket and mortar shells were fired from Gaza again today, and Israel responded by targeting targets of the Hamas terror group that controls Gaza. About a hundred Palestinians demonstrated along the border. Israeli forces fired grenades to keep the Palestinians away from the border fence.

Israeli Prime Minister Netanyahu said that Israel is preparing “for any scenario.” He also called on all parties to remain calm. Defense Minister Benny Gantz said the army would “do whatever it takes” if the situation in Gaza escalates.