Plan with 550 houses and lots of green space vs Naturalis 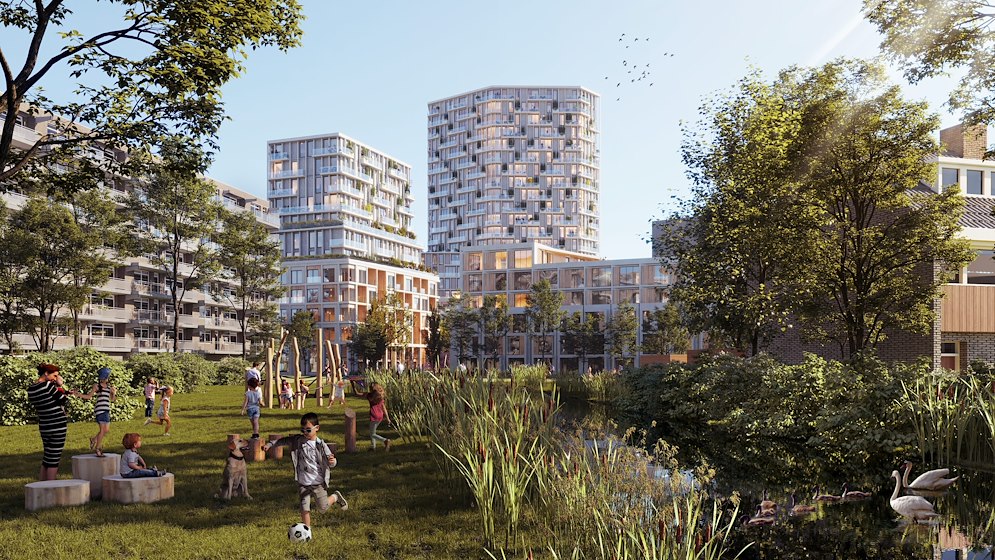 Regenbot She is working on a project of 550 homes at the current Motorhuis site in Leiden. It is about two basic pieces, which are installed in a green environment. This outdoor space is again designed to be an extension of the adjacent Park Kweeklust.

The Vondel en de Zwaan housing project is being developed in consultation with local residents. The project site is located at a focal point between the city center, Park Kweeklust and the Hoge Mors district. The Naturalis Biodiversity Center is also located across from Plesmanweg. The expansion of the park into the public space within the project plays an important role in the plan.

“With differences in elevation, generous plantings of trees and shrubs, winding walkways and street furniture with a natural appearance, the desire of the locals to create a park of high natural value as a valuable addition to the existing park was fulfilled,” Rijnbott reports.

The surrounding roads and streets are made greener by realizing trees and plants. The park is continuous between the north and south block. The homes in both blocks are intended for a wide target group, from beginners to seniors. The supply of housing is divided into purchase and rent for the social, medium and private sector.

The front door on the street
The higher north building will house studios and various types of apartments. In addition, three-storey houses with a front door facing the street or the garden are implemented on the block. In addition to the entrance areas for studios and apartments, the base will contain functions such as co-working spaces, restaurants, sports facilities, and a communal library.

In the lower south block, a modern form of cohabitation is provided for the elderly around a courtyard. At the top of the parking garage, there will be a communal rooftop garden surrounded by homes that will be designed with joint-commissioned buyers. Rainbot said that process will start this summer.

Buildings are built as sustainably as possible, for example using timber construction as the foundation for owner-occupied homes. The embodiment is based on dry connections and is therefore flexible and detachable. Only fifteen percent of the normal amount of concrete is used, the parties involved pledge (plus Rijnbott, this includes the FSD developer).

“The building blocks are designed from the multi-layered facade principle; this gives the buildings a distinctive signature, but not a uniform appearance,” explains architect Jurjen de Gans. For example, the facades through Plesmanlaan and Vondellaan are designed differently from the facades on the park side, based on their orientation and exposure to noise. Due to their location in the south and in the lye, the latter facades will be provided with wide and cantilevered balconies.

warm weather
The use of wood in the facades should ensure a beautiful image and a warm atmosphere. Thanks to the difference in the rhythm and softness of the interfaces, the different components of the program, such as residential houses, apartments and commercial program, can be read in the interface.

The final design for Vondel and de Zwaan should be ready in December. Construction is expected to begin in January 2023, to be completed at the end of 2024.