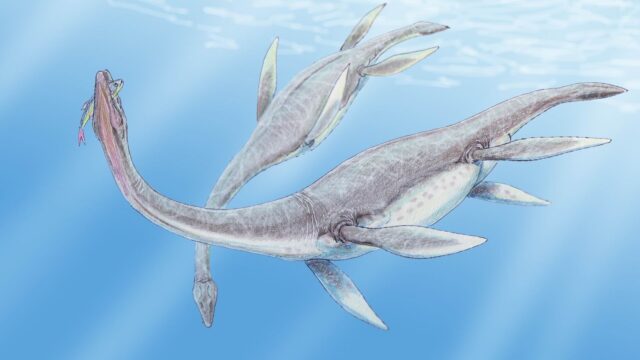 Since the limestone had not been mined for eleven days at Winterswijk’s quarry, Reumer and his colleagues were given the opportunity to search for fossils. They made an unusual discovery: the teeth and vertebrae of marine reptiles. The teeth are definitely from some kind of plesiosaur. For about 174 million years, the Earth was inhabited by many different types of plesiosaurs, until the latter became extinct 66 million years ago by a massive meteorite impact. The vertebrae found in Winterswijk could be from a plesiosaur, but also an ichthyosaur. Ichthyosaurs are also marine reptiles, but have more of a dolphin appearance.

The fossils found are ancient: more than 200 million years old. Animals lived in the Triassic period, the first of the “Reigns of the Three Dinosaurs.” Although Plesiosaurus and Ichthyosaurus are sometimes called dinosaurs, they are really two different animals. They represent the other branches of the family tree of life.

After Romer and his colleagues found the remains, the remains were extensively cut up, after which the piece of stone along with the fossil was plastered. The fossil is now dumped somewhere in a shed in Winterswijk, awaiting transport to Naturalis. Here the fossil will be carefully removed from the stone and further examined. This investigation, which will take at least another six months, should reveal, among other things, the species involved.

See also  Max Verstappen: "I think there is still a lot of room for improvement"