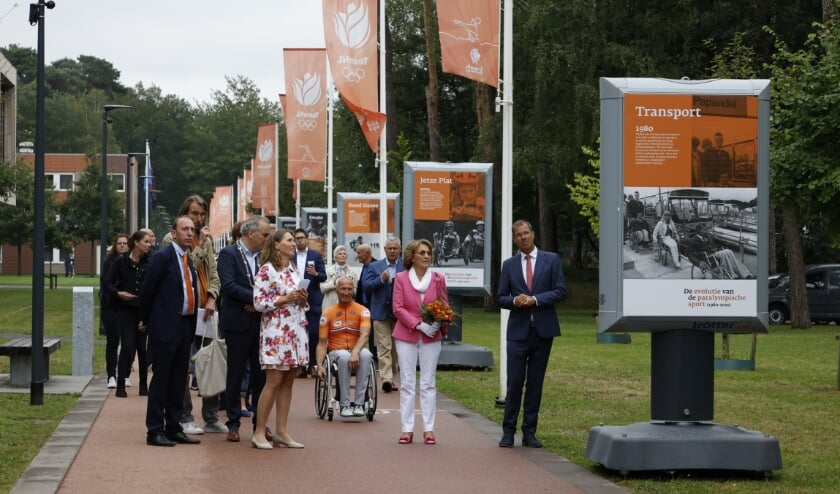 Arnhem – Princess Margaret inaugurated a photo exhibition on Paralympic sports at Papendale in Arnhem on Thursday 19 August. The fair is a birthday gift from the county of Gelderland and the municipality of Arnhem to the Papendale Sports Centre. The oldest national sports center is 50 years old.

Representative Peter Van Hoog welcomed the Princess on behalf of the county of Gelderland. Addressing the attendees were national coach of the Dutch volleyball team, Hans Mater, national Paracycling coach Elke van der Waal, and BMX rider and silver medalist Jelly van Gorkom. After that, Johann Rikers handed a torch to Princess Margaret. With the symbolic ignition of the Olympic flame, the princess officially opened the photo gallery.

Rikers won the gold medal in 1980 as a seated volleyball player at the Paralympics in Arnhem. Then the Netherlands held a major Paralympic event for the first time. The exhibition in Pappendale with 24 large photos shows how Paralympic sport has evolved since 1980.

As director of the Red Cross, Princess Margaret has been involved in the organization since June 1980. This year, she also opened the Paralympic Games in Arnhem, the sixth edition at the time. Since then, the princess has been closely involved in parasports. In 2005 she became a member of the Honorary Council of the International Paralympic Committee.

Photo gallery A gift from the County of Gelderland and the Municipality of Arnhem to 50-year-old Pappendale. Senate Vice President Peter van Hoog: Our motto is: Whoever wants, should be able to participate. Inclusion is also important in sports. That’s why I’m happy with the continued huge interest in less capable athletes. I wish them all the best in Japan! This gallery, in other words this gift, showcases many beautiful highlights.”

Gelderland wants to integrate into the sport. The county motto is: Everyone can participate in sports! For example, Gelderland is working on the project plan to “become uniquely big in Gelderland” with HAN, GSF and Top Sport Gelderland. This should ensure that more talent from Gelderland with disabilities is discovered and can apply to the National Choices programmes.

The exhibition runs from August 19 to November 1.