Racism in football always follows the same pattern: ‘We lack leaders who condemn it structurally’ 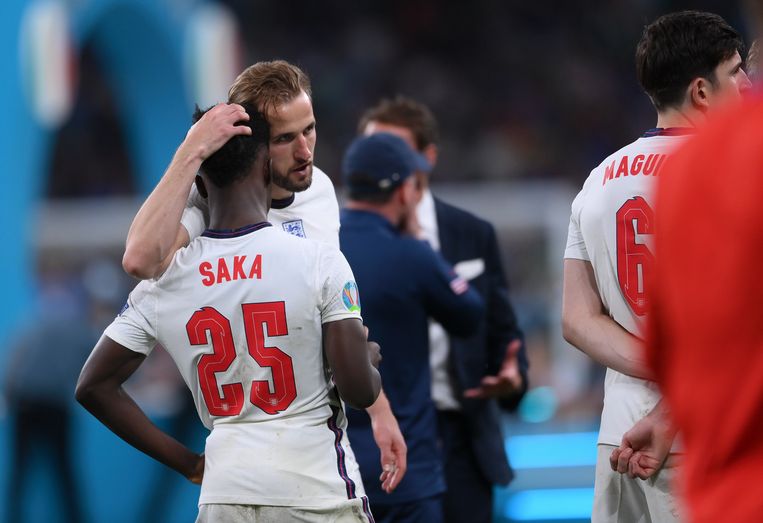 Nearly 40 years ago, black professional footballer Cyril Regis was selected for the England national team, after which he received a mail shot from a racist football fan. Racism in and around football, both in England and the rest of Europe, is by no means new. Because of social media, footballers are now victims of it on a much larger scale.

Racism is everywhere, but it surfaces in football

A simple indication: in the 2014/15 season, 135,000 discriminatory messages were posted on social media about clubs or players in the Premier League. Since then, this has likely increased dramatically, and no one knows to what extent.

Last season there seemed to be a real wave of racism across social media in England. Some of the victims were famous players such as Marcus Rashford, Reese James and Anthony Martial. On the night from Sunday to Monday, Rashford, Saka and Sancho became the target of a missed penalty shootout. “The problem of racism is not increasing, as it has always been. But racist expressions via social media are on the rise, according to English research,” says Professor Dr. Jaco van Sterkenburg, an expert from Erasmus University Rotterdam.

Van Sterkenberg does his own research in the Netherlands, currently on anti-Semitism in football. “Racism is everywhere, but it is more visible in football. It is a multi-ethnic sport and there are a lot of feelings. If you want to know what are hidden feelings and taboos in society, the best thing to do is watch football.”

It appears that organizations and clubs in English football are now aware of the structural nature of the problem. With “Kick it Out” there is a separate anti-racism organization. A lot of scientific research is also being done. Last season there was a “hate incident”, often racist in nature, in 287 of 2,663 professional matches in England and Wales: more than 10 percent. The number of arrests for racist or offensive chants increased by 150 percent. Van Sterkenburg: “But because of the concern for control, you often also get a counter-reaction.”

In the living rooms, people with a smartphone in their hands feel anonymous and express themselves more racially than in stadiums. However, things often go wrong there, too. Van Sterkenburg: “England is not unique in this respect.” This phenomenon also occurs in the Netherlands. And during this European Championship, Hungarian fans misbehaved with jungle sounds towards the French players.

“We lack leaders who strictly and structurally condemn racism.”

The pattern after each incident is always the same: unions, politicians and public figures on television express their anger. Then it fades again. This is why the clubs in the Premier League all season and the English team in this European championship kneel before every game to draw constant attention to the problem. Rashford said of it last week: “Only time will tell if the situation gets better. It hasn’t improved in recent years.”

The big tech companies say they are doing what they can. A Twitter spokesperson told Reuters that more than 1,000 racist tweets had been removed Sunday night and several accounts had been blocked. Van Sterkenburg thinks it’s OK for them to be monitored better, but it remains to have “symptom control”. “What I think was important and what was lacking in England: leaders condemning it structurally and sharply. It didn’t happen with boos against kneeling and that creates space for legitimizing wrong behaviour.”

“Prime Minister and Minister of Interior delivered the racists”.

There is still a bit of orange in the European Football Championship colours: the orange of the rainbow flag. But who decides where and when to see it?

See also  Name Change and the Flag of the Confederacy: An Intense Debate on Racism in American Sports