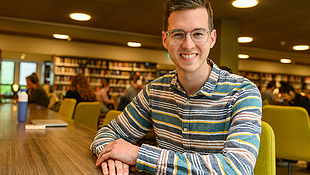 From: Rick Van Will
what or what: political scientist
where: Leiden University
Stady: BA in Political Science (Leiden University) and MA in Political Science and Public Administration (Leiden University)
Promotion about: The behavior of government and opposition parties in Parliament. When will the government and the opposition work together and when will they confront each other?
I chose this field for the following reasons: I am curious about how people make political decisions. I’ve been like this since 2010. Then I consciously witnessed the first parliamentary elections. This was followed by a period of tense politics, minority governments, and new forms of cooperation between government and opposition parties. Fascinating! I wanted to know more about it.
Boy: October 2, 1994 in Münsterglen (Sittard)
The best thing about being a scientist: It allows you to systematically investigate complex phenomena. Every step you get close to it, every puzzle piece it fits… gives a sense of excitement.
Most memorable moments as a scientist: Sharing my preliminary research results with my fellow political scientists at an international scientific conference in Prague. My presentation was on the parliamentary electoral behavior of opposition parties in the Netherlands, the United Kingdom, Canada and Denmark. This was followed by a useful discussion with many questions and suggestions for improvement, but the best part was the reaction of the political scientist, who was already researching this topic himself. He was able to tell me in ways that my research was innovative and contribute to the existing scientific literature. It was a nice compliment, but it also helps me write and “sell” a scholarly article about my research!
The hardest thing about being a scientist: Scientific research is a matter of patience. You have to take many steps to answer the research question. You spend a lot of time making adjustments and improvements before you’re satisfied. Moreover, reality does not seem to regularly adhere to our theoretical expectations and models (but this is of course a good reason to conduct further research).
hobbies: Reading, going to the theater or cinema, Netflixing, cooking, baking, walking, tennis, playing the piano
What do you hope to achieve by blogging on Faces of Science: I want to make it clear what the young academic does and why. I want to paint a realistic picture of what a Ph.D. entails. In addition, I am naturally trying to share my passion for my research and want to show how political scientists try to map and understand political behavior.
Who is your great example? I don’t have a single great example, but there are plenty of people who inspire me. Other political scientists, but also friends or family. People who have creative ideas or write about their research. And those who do not continue to mess with their work for a long time, but at some point they dare to decide that something is “over”.
What did you want to be when you were 7 years old? Musical Star (and Masters)
When you were 17 years old: journalist or policy officer

Me and the media: