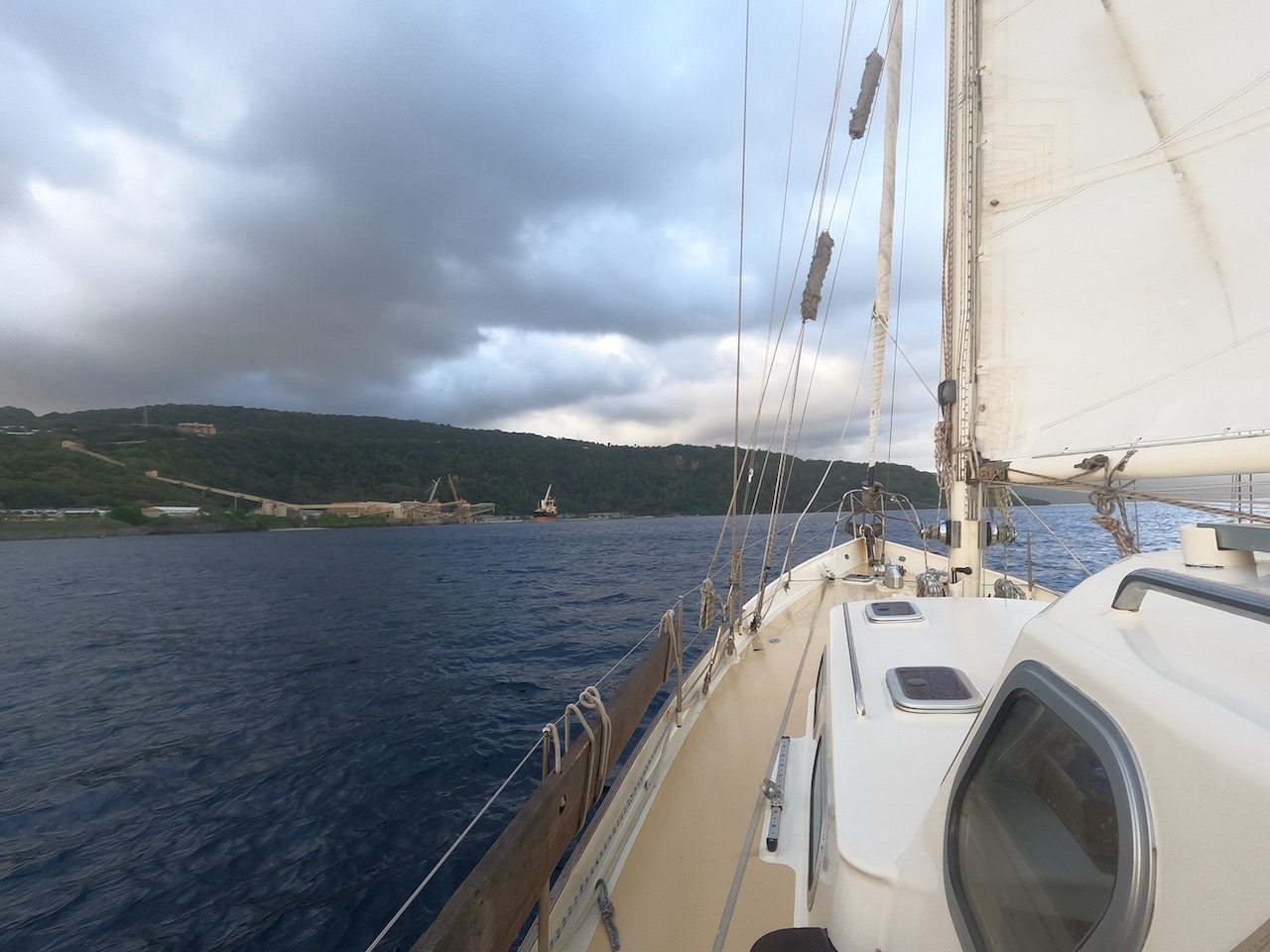 Places that even Australians have never heard of.

A visit to Christmas Island

“Sure?” Floris tries one last time. “Yes, of course,” Iver says firmly. After months of deliberation, we’re taking the plunge today: here we go No to Asia. It didn’t make us happy and we wanted to travel there. We actually spent the year taking it off because of the pandemic in New Zealand. Nevertheless, we hoped to spend some time in Indonesia as a stopover en route to South Africa. Unfortunately, seafarers’ permits are too expensive and complicated for the limited time we have. We still have a long way to go. South Africa is calm, while cyclone season approaches in the southern Indian Ocean. “Now we have time for the exotic islands between Australia and Indonesia,” Iver puts things into perspective. Places that even Australians have rarely heard of – we’re excited to see what we’ll find there. 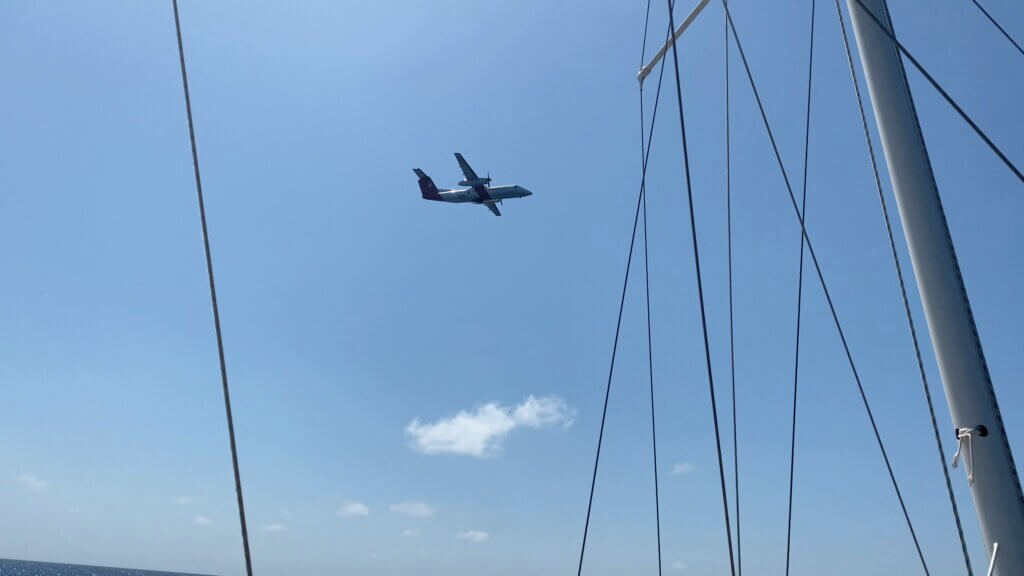 Big brother is watching you

“Lucifera 2, which is the Australian Border Force”, a sudden noise from the radio. Ivar answers the call, while a noisy plane flies low over our boat. “Our home port is Amsterdam. There are two people in the boat. Darwin is behind us and two APF officers are with us before departure. We have already answered all the questions. But it doesn’t stop there: in the following days we get a visit from an aircraft and a patrol vessel from the Australian Coast Guard. Very politely they ask the same questions again, to which we – just as politely – give the same answers. “Big Brother is watching us!”, laughs Ivar. “Yes, Fort Australia is well protected,” Floris replies.

Ashmore Reef from the mast

On the fifth day, a green dot appears on the plot: Ashmore Reef. Although we are close to Indonesia, the reef still belongs to Australia. It is mostly submerged, but provides shelter from the sea’s fury. There are also mooring buoys. “We’re going to celebrate my birthday there!” Ivar cheers. Our entry into the sheltered lagoon takes some puzzling, but we find broken swells that mark the location of treacherous reefs. In the morning we pass a huge APF patrol boat and go through the gateway. We follow a concrete channel to the mooring buoys and are glad we are no longer rocking. A few minutes later, a rib comes towards us with three officers. They explain to us where we can and cannot go. Strict action is being taken against illegal fishermen as the natural resources are protected throughout the region. Violators are arrested and their ships are burned. “Leave that fishing line for a while”, Floris whispers to Ivar. 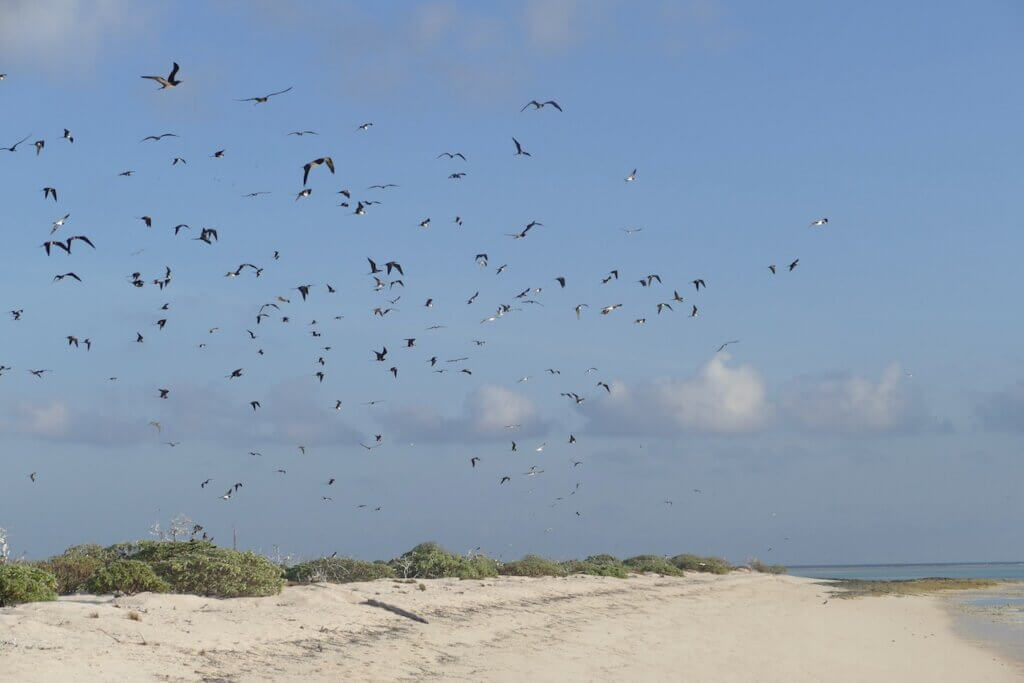 Thousands of birds on Ashmore Rocks

As we raise the kayak, an American boat sails through the pass. While they are securely attached to a mooring buoy, we paddle past. “Are you coming to dinner tonight? It’s my birthday”, beamed Ivor. “And our boarder,” they laugh, “and we bring the cake.” We marvel at the coincidence and continue kayaking. After a while, we will explore more and more of the uninhabited island. We paddle onto a sandbar, pull the kayak onto dry land, and continue walking. Once there, we run out of excess. “Non-one, you said, didn’t you? Look!” Floris jokes. Thousands of birds are in shallow water, among bushes and on the beach. They hover overhead – just as we are curious about ourselves. Fluffy chicks in nests include warblers, boobies and terns. We are delighted to see the incessant flight of parents bringing food to their young. They don’t have to worry about predators and will encounter few in their lifetime. “What a special place to celebrate my birthday, in the middle of untouched nature,” says Ivar.

The next island in the Indian Ocean is 1,000 miles away. Our journey begins in nearly flat seas with just enough wind to fill our gennaker. We haven’t made many miles, but we’re happy with every bit of progress we make. A day later, the southeast trade winds pick up to about twenty knots and we are increasingly emerging from the lee of the Australian mainland. A south-westerly tide crosses a south-easterly wind wave. Conclusion: We roll. Is this a taste of conditions degrading the South Indian Ocean? We keep rocking, sometimes interrupted by a big slider. Going to the toilet, sitting, cooking and sleeping: everything requires effort.

See also  Return to Jorce from Virginia in the United States: Better Than Home (Zoersel) 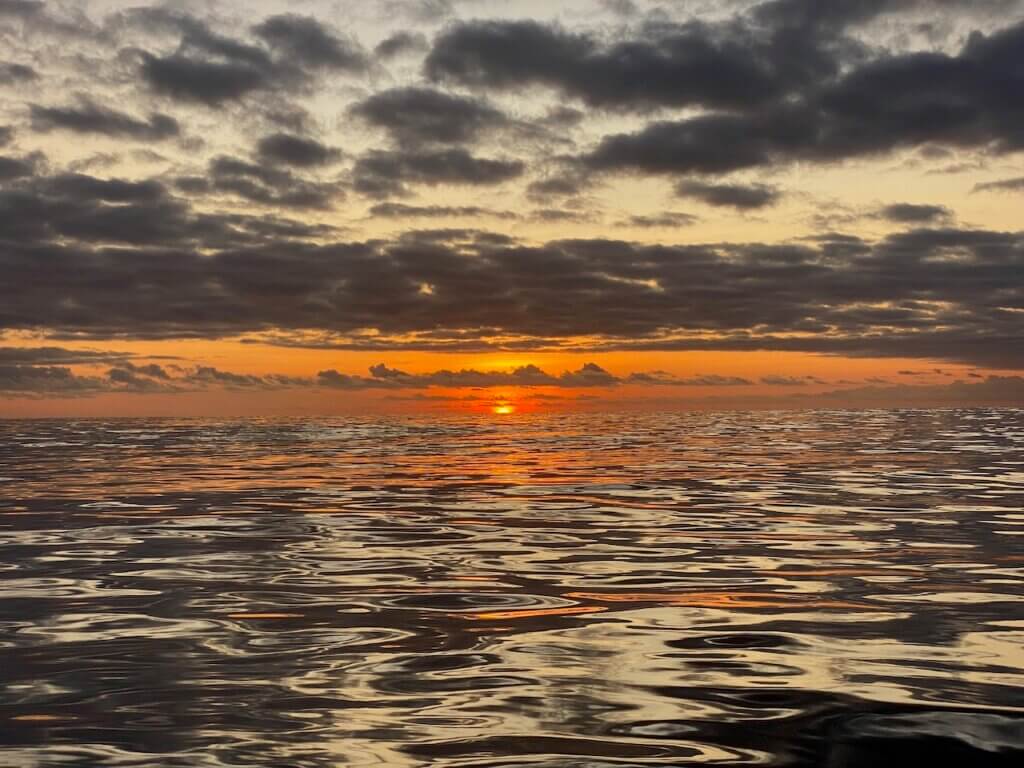 Quietly back on the way to Birthday Island

It’s embarrassing, but it’s hard. The ocean current helps, too: we have a thick knot of current that means we cover more than 170 miles in 24 hours. Will we arrive in time to celebrate Floris’ birthday in the land? 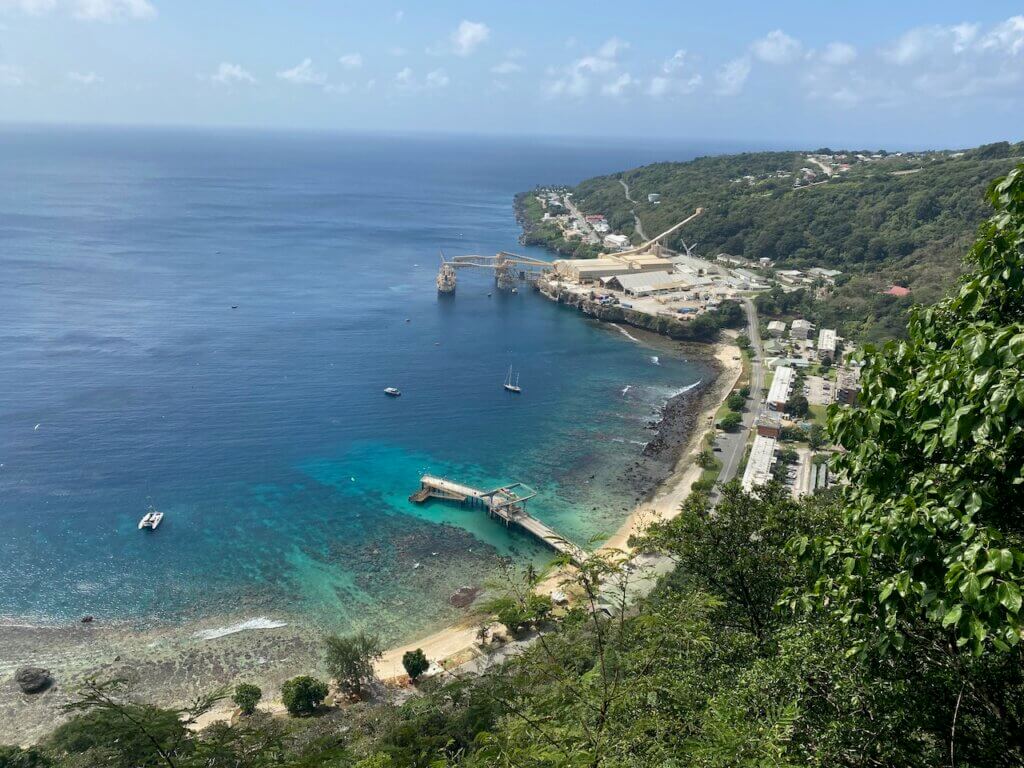 “Christmas Island? When Captain William Miners passed the island in 1643, it was Christmas. This is our birthday island!” Ivar jokes. And it worked. We come to the same anchor on the first day of Floris’ birthday: Flying Fish Cove. The harbor master asks us to wait for a cargo ship carrying phosphate. Then we can move to a mooring buoy. There is hardly any swelling and the lush environment invites you for a birthday walk.

Can’t tell too soon. After we check in, we follow a walking trail through the forest to a steep overlook. Be careful not to step on red crabs on the way. Fallen tree leaves are consumed by thousands. “When hurricane season starts, they all migrate out to sea,” says Floris. “Roads will be closed for red crab avalanches!” 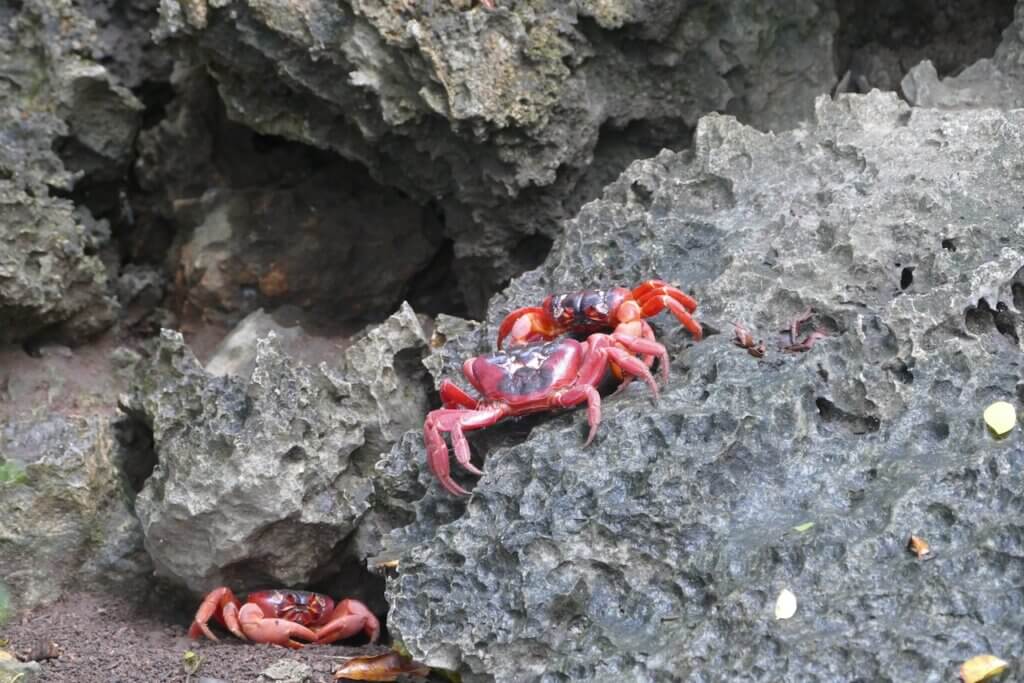 From the viewpoint we see the bay where Lucy is located. A gigantic phosphate transfer disrupts the beautiful picture. “Don’t forget the prison”, warns Floris. “Foreigners who have come to Australia illegally or whose residence permits have been revoked are being held here.” “Not every tropical island is equally unattractive,” Iver concludes.

It is also visible the next day. We are going out with two Australian sailors who have been working here for six months. While we talk endlessly about sailing, remote locations and sustainability, they show us every corner of the island. We walk through pristine forests, impressive waterfalls and beautiful beaches. But even there we are shocked: an astonishing amount of plastic floats in the sea and covers large areas of the beach. Coconut crabs scuttle among the debris. Each of us fills a big garbage bag, yet we realize that the problem of plastic pollution needs to be tackled at the source. 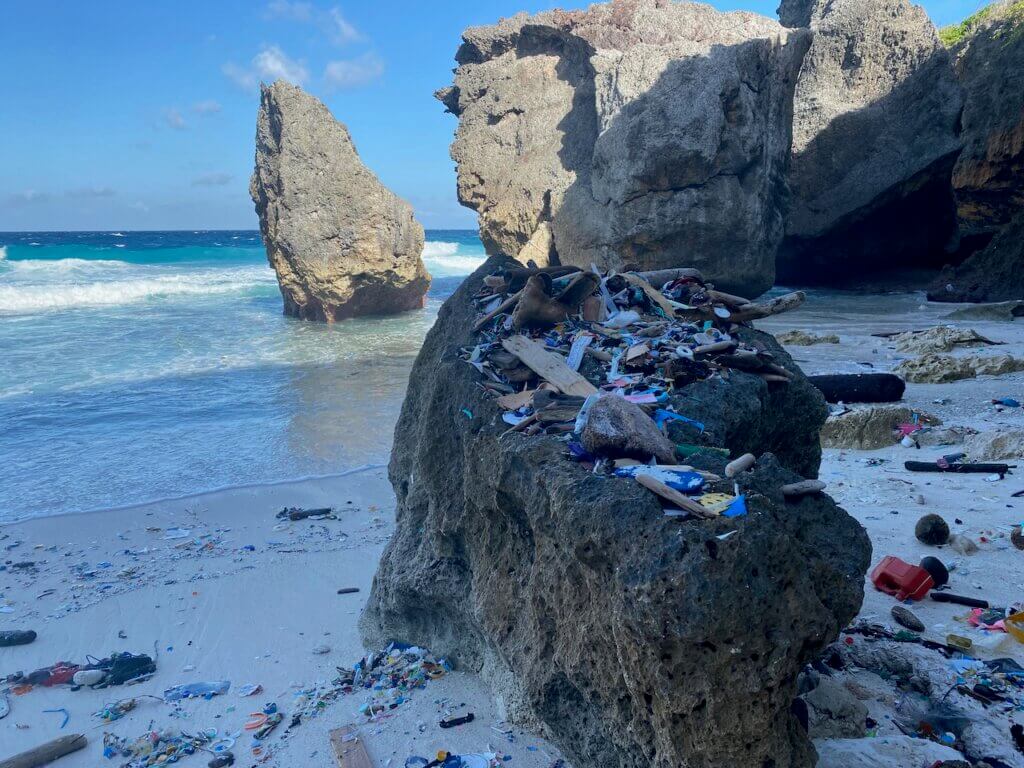 A bit of Asia anyway

Our new Australian friends understand our path dilemma: sailing is about making choices. “But you can also see a part of Asia here. We’re 200 miles from Java, and there’s a lot of Asian culture here!” To back up their words, they show us the mosques, Islamic cemeteries and small temples scattered around the island. The shops are run by Asians, and they sell all kinds of things from their continent. “That way we can soak up a bit of Asian culture,” laughs Ivar. “I don’t regret choosing our path, I’m already looking forward to the rest of the Indian Ocean!” 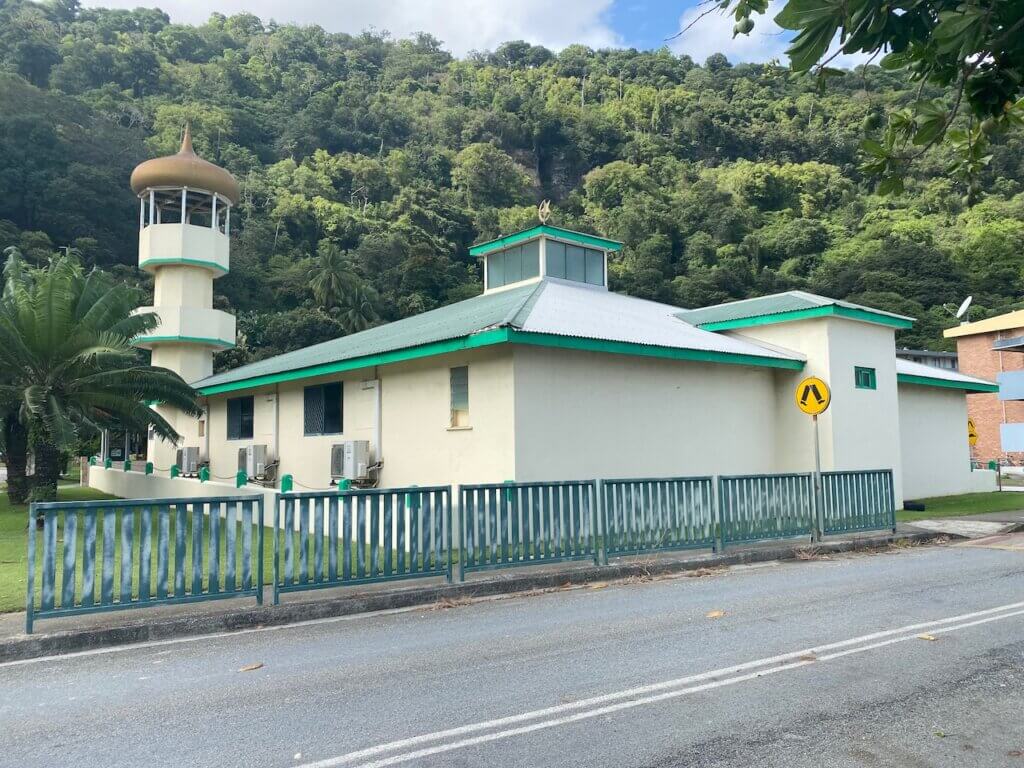