Smart Danes can party in Amsterdam 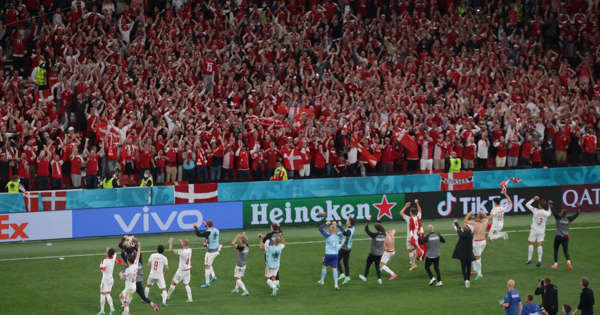 © ProShots
Once again alone on the field: smart Danes can party in Amsterdam

For the second time in a row, Denmark appears to have a huge advantage at home during a match at the European Championships. In the last group match against Russia (1-4), Russian fans were not allowed to travel to Copenhagen, and neither were Welsh fans in Amsterdam. Fans from Denmark can watch the match in the stadium, but they have to do it smartly.

Denmark and Wales are tied in the eighth final, the match will be played at the Johan Cruyff Arena. Wales is part of the United Kingdom and this area is not on the Dutch government’s list of safe areas. Therefore, travelers from countries such as England and Wales are not allowed to come to the Netherlands to attend a football match.

The same applies in principle to Denmark. After all, the name Denmark is also missing from the same list of the Dutch government. However, the Scandinavian government has found a way for fans from Denmark to continue coming to the Johan Cruyff Arena.

Eric Brueger of the Foreign Ministry indicated at a press conference that the masses could avoid a ten-day quarantine in the Netherlands if they stayed in our country for only twelve hours. Arrive on match day and fly home soon after from Denmark – Wales is the way to watch the match and get home without any hassles.

It is not known if Wales fans can travel to the Dutch capital in the same way. Health Minister Eluned Morgan has already said that fans from Wales are not allowed into the Netherlands. However, close contact is maintained with local authorities in the Netherlands to set up fan zones if necessary.

READ  American athletes in shock: "What if blacks stormed the Capitol?" | Other sports

The question then is how many fans will be in the stadium next Saturday. During the first three group matches of the Dutch national team, there were always fifteen thousand people on the field. Wales-Denmark is also the last European Championship match to be staged in the Netherlands.