In the future the interests of the party municipality, the largest of the parties involved in the management of Oisterwijk, will also focus on cheaper houses in the so-called Room for Space projects. To date, large (medium) houses for such projects have been steadily built. 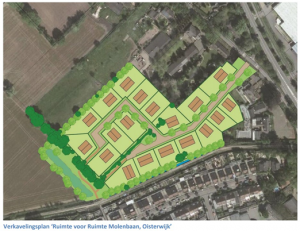 With the room-to-room scheme, it is possible to build new houses as opposed to demolishing (agricultural) buildings. Owners of agricultural projects receive financial compensation for the demolition of stables and commercial buildings. The plan for 19 houses in Molenakker in the Oisterwijk district of Pannenschuur would have larger homes, but the PGB wants to change that in the future. We recently realized that Ruimte-voor-Ruimtewoningen may also be smaller/cheaper. The plan on Molenbaan was already so advanced that we did not think it appropriate now to reverse it.

It was agreed that at least 35% of the new homes to be built would be in the social sector. If there are many projects with little or no social housing, this must be offset elsewhere. By achieving affordable homes for Ruimte voor Ruimte projects, this ratio is better balanced. Fortunately, these homes can also be made smaller in the future, so that they are more affordable. This is important to the PGB for these types of homes in the future, as this can also help combat housing shortages.