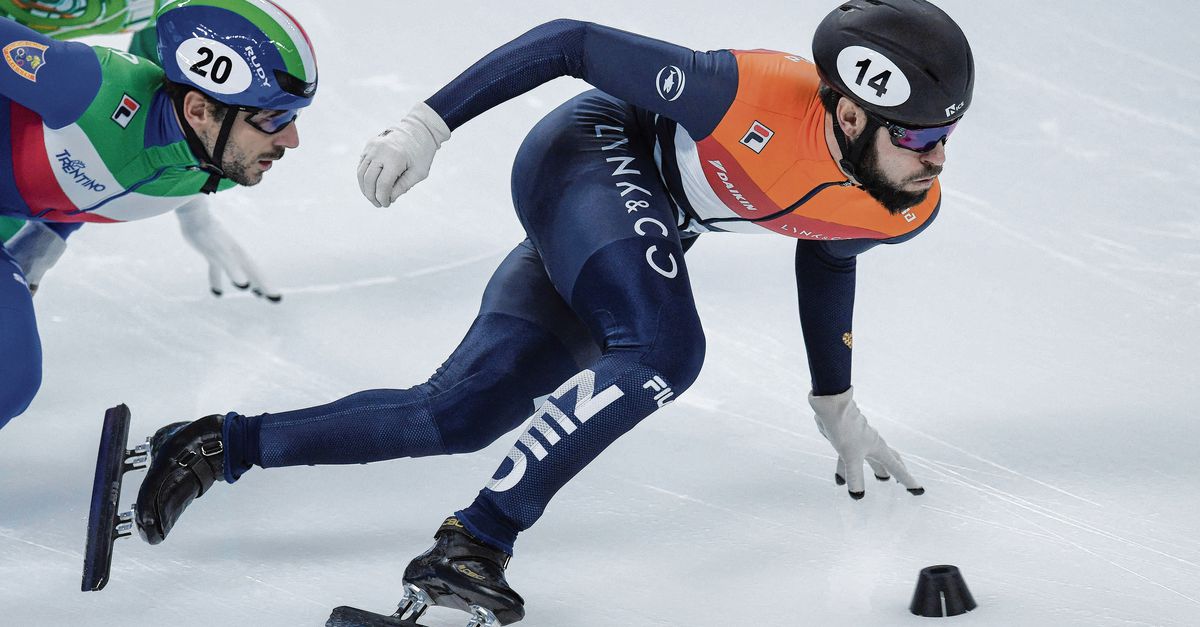 If you ask Sjinkie Knegt, 32, not much has changed about short track speed skating in Beijing thirteen years ago. The capital’s indoor stadium, the ice rink where the first World Cup race of the season was held this weekend and where the Olympic races take place in February, is located in the same location when Knegt skated there for the first time in 2008. The only difference he could think of, as Says from China, is the color of the seats. “It used to be red, yellow, and blue, and now only blue.”

However, the conditions are very different from what they were at the time. In 2008, Knegt was a teenage talent with the best quarter-final performance in the 1000 metres. None of the other Dutch participants reached the final. Two years later at the Winter Games in Vancouver, seven speed skaters competed on a short track, and no one made it to the final there either.

The Dutch national team traveled to Asia with higher expectations. During the World Cup competitions in China and Japan, and later in Hungary and the Netherlands, Olympic tickets can be won, up to five tickets per gender per country. The qualifying procedure is complicated, but it is almost due to the fact that at each distance – 500, 1000 and 1500 metres – the Dutch have to skate among the top thirty races of the World Cup. And in line with the seven best countries. “I’d be disappointed if that didn’t work,” says national team coach Jeron Otter. “We are such a big country that we should be in the games with five men and five women.”

The Netherlands wants to win medals at the Winter Games. In 2014, Knegt was the first Dutch short tracker to win an Olympic medal, his bronze in the 1000 metres. Four years later, he took silver in the 1500-meter race, and Susan Schulting became an Olympic champion in the 1000-meter race.

Sharing is no longer enough. “I’m striving for the highest that can be achieved,” says Kenigt. Schulting will accept less than twice the gold. Skaters such as Selma Botsma, Xandra Felzenbauer and Itzak de Lat won World Cup medals last year. The Netherlands is the top candidate in the relay, men’s, women’s and mixed.

The Dutch short track has come a long way, says Nils Kerstolt, a former short tracker and now coach of young talent. He has countless examples of the poor state of the short track at the beginning of this century. For example, the National Coach was also a psychiatrist for a while, due to a lack of funds for more supervisors.

Or take 2006, when a large part of the skaters from the base team decided to stop after the games in Turin. Kirstolt was the only man left on the level. Then I decided to train for two years with an international team led by Jeroen Otter. Only after that I started skating with the main team again.”

The contrast with now is great. The National Short Track (NTS) Training Selection featured twenty short track speed skaters and traveled to China with a training team of about eleven people. In addition to the national coach, there is an assistant, equipment man, three physical therapists, a team manager, a team doctor, a dietitian, and two. Embedded scholars, which collects and analyzes data about short trackers.

Bjorn de Lat is one such scholar. Until joining NTS in 2014, his predecessor did analytics part-time. “He only collected data in the winter, but especially in the summer when you don’t have competitions to test the model, the data is what matters.”

In those early days, De Laat started collecting data, not knowing exactly what he wanted to do with it. “We’ve tried everything.” Now measuring and archiving data is more accurate. De Laat has now got a colleague because of the massive amount of data.

Starts, relay changes, lap times, everything is analyzed. This leads to more targeted training. De Lat: “We give skaters insight into themselves and the feeling that they have everything they need. This gives them more confidence.”

The shift towards the top is often attributed to Jeroen Otter, national coach since 2010. Otter himself once described his role in developing the Dutch short track as a manger who only had to put the rank.

This is very modest, says Kerstolt. “Jerwin has played an important role in professionalizing the sport. He is always looking to improve.” But the NOC-NSF also took steps before Otter arrived. In 2006 they realized that the Netherlands could win Olympic medals on a short track. So the money tap was on.” Gilles Kerstolt went in search of technical knowledge to improve themselves. “A lot had changed before Otter came along. We continued that with him.”

The upper part of the Netherlands is now much wider. Training with foreign teams, as the national team has done in recent years, no longer takes place. “When the old generation stops, there will be a group of young people who are hardly inferior to them,” says Kerstolt. The difference between the number one and ten is no longer a second per lap, but a few tenths of a second.

The fact that the young goalkeeper is much better is due to a different training structure. In the past you only had Junior Orange, and on top of that you had the core team. If you go out, your career is essentially over. Today there are three regional talent teams. There are young trackers who are trained in good basic techniques and performance behaviour. “It is being delivered to the NTS more completely than before. The step to the top is smaller, says Kerstolt.

As a result, there is more competition in NTS. Not everyone can go to World Cup competitions or games anymore. “Usually we train with twenty people, and now half of them,” says Susan Schulting. Knegt has seen the development of the Dutch short track at close range. “I was there from the moment they dropped them.” Knegt is happy with the high level in the Netherlands. “You can only dream that there are six good men in the relay.”

Another advantage of Negt’s wide jersey: in the run-up to the previous games, he had to start almost every match in order to get Olympic starting tickets for the Netherlands. In weeks like these, with two consecutive World Cup races, that can be up to forty. “Now I just have to drive two distances.” Kneijt wants to say that the Netherlands has a welfare problem these days.

The Dutch short-track trackers started the World Cup season well in the relay. In Beijing, Itzhak de Lat, Sjenke Knigt, Sven Ross, and Jens van te Vout advanced over the Hungarians and Italians. Dutch women came in second On the relay behind China. The Netherlands also finished second in the mixed relay, again behind China.

There was a solo success for Susan SchultingWho won the 1000m race.

A version of this article also appeared on NRC on the morning of October 25, 2021