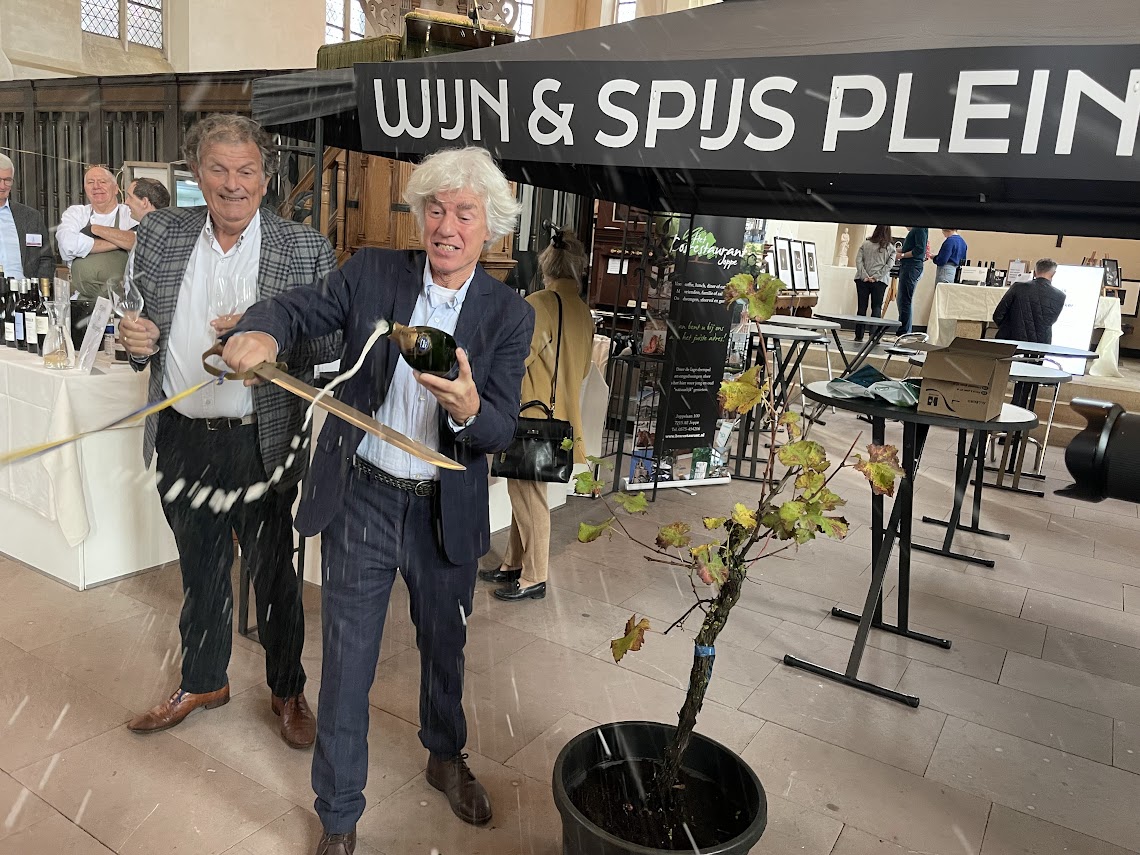 Lokem – Lokem with Taste wine festival returns after 3 years at Kutula Church on Saturday (15/10). The fact that it was not longer than usual did not affect the event. It was busy and there was plenty for wine and food lovers to enjoy. On behalf of the organization, Harry Mengering looked back with great satisfaction on a great edition of the festival.

“I hear many excited voices from the visitors. It is estimated that there were 675 people inside. It is a good number,” says Mengering. Counting the number of visitors is a matter of ‘glass counting’. Upon entering, each visitor is given a wine glass, along with tastings of wines from around the world at several stands. Well-filled glasses or snacks can be purchased for a fee.

For the opening of the festival, the President of the Local Authority (PC) of Gudulakerk, Martin Lammers, was invited. He said the money generated by the Madhu Festival is welcome. The church has literally become an event space. The building has been managed by the Oude Gelderse Kerken Foundation for many years. The PC is responsible for what happens inside. Culturally, but also in terms of design. This year’s new mood lighting paid off with ‘lochem meets smack’.

As an opening act, Martin asked Lemmers to pop a bottle of bubbly, in other words, uncork it with a saber. It took a few steps, but the spirit-filled liquid flowed freely. From France, Italy, Spain, Germany and even New Zealand, filled red, white or rosé glasses were a sign for visitors.

Read more below the picture…

Apart from wine sellers, many restaurant owners and caterers were also present. This is more than the previous six editions of the festival. In hopes that people would stick around for a bite — thereby increasing revenue for the church — the start and end times were moved to later in the day. As the church slowly empties out at the last hour, the plan succeeds well.

Among the exhibitors were many local entrepreneurs. Butcher Sieverink, poulterer ‘t Vöske and Zuivelhoeve, for example, the successful Laren caterer Lekker Laorns. Mitra and Corsal liquor store de Wingert also participated. Some supermarkets offered their wines at the church. Jupe Cornelis from Plus: “This is a great opportunity to introduce people to our wines. We don’t allow people to taste in the store, but we can do it here and in a friendly atmosphere.

Read more below the picture…

German wines were, by mistake, often missing during previous editions of ‘Lochem met Smaak’, but this time DokterMaler from Lichtenvoorde was there to fill the gap. Vinos y Mas Spanish wines from Varnsveld. Vinovicchio, a wholesaler and importer based in Apeldoorn, was very successful with more gastronomic wines from Portugal and others.

Those who want to keep it closer to home can head to Wijn van Helène and Wijngoed Kranenburg. The restaurants De Babbelaer, Hof van Gelre, Bij Jansen & Jansen, Witte Wieven, Zwijnshoofd and Bosrestaurant Joppe served a variety of snacks.

Also worth mentioning is the presentation by sponsor Head Antwerp, which consists of a series of photographs brought to life in a brilliant way by augmented reality. You can also apply this technique to your own photos or designs. And for crew member Rude Weiss, this will be his last edition of the festival. He was thanked for his efforts and ‘rewarded’ with a special bottle of wine.