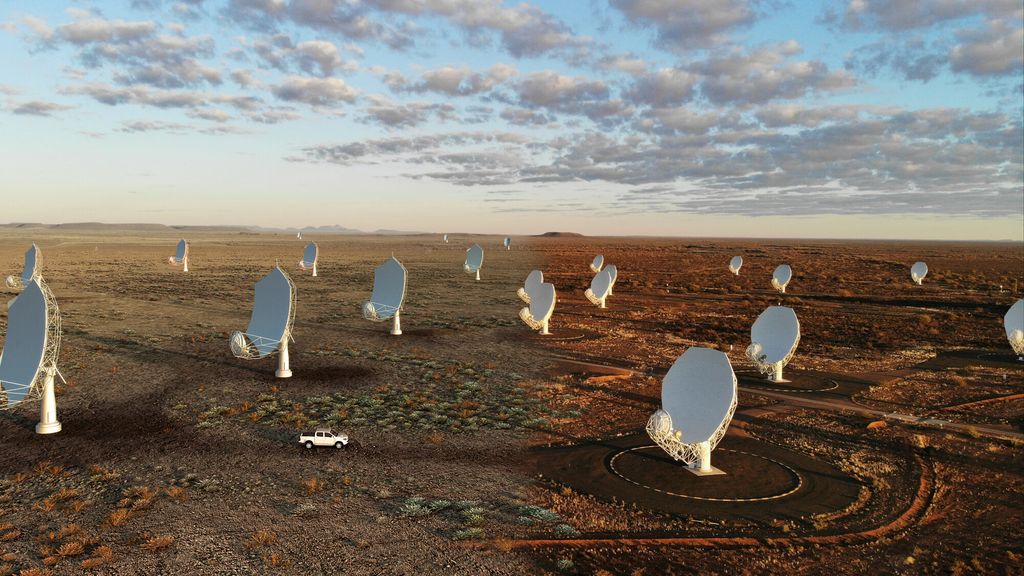 It seems almost unimaginable: a huge telescope could capture the signals just after the Big Bang that are still floating in the universe and turn them into images. However, scientists believe that soon it will be possible: this week the go-ahead was given for the construction of the world’s largest radio telescope: the Square Kilometer Array, or SKA telescope.

The telescope will map parts of the universe we’ve never seen before. It is a huge international project worth two billion dollars, in which the Netherlands is also investing.

The telescope is being built in two locations, in Western Australia and South Africa. In the latter country, an existing 63-dish radio telescope will be expanded to 197 dishes, and in Australia, more than 130,000 antennas will be located where a predecessor already exists. All measurements will be compiled shortly.

Tracy Cheetham, Director of Infrastructure for SKA South Africa, had a very exceptional tour this week of the site where the construction will take place in South Africa. A visit is rarely possible, because the already existing MeerKAT telescope is extremely sensitive.

That is why the telescope is located in one of the quietest places in the world, in the vast Karoo Desert, in a place where there is no mobile coverage. However, all smart phones and watches must be switched off before entering Earth. Because bluetooth can also disable the measurements.

“This telescope is listening to the universe,” says Cheetham, who is responsible for building the Large Telescope in South Africa. “All stars and galaxies emit radio waves, which the dishes receive and digitally convert. We can then make pictures of them, a picture of space. The more dishes, the more pixels, as it were, to catch.”

The telescope should become 50 times more sensitive than current telescopes and soon it will not only be able to take sharper pictures, but also to look for more. “Like what happened after the Big Bang when we went from darkness to light. It’s incredible, but radio waves are still on their way to us. We also hope to learn more about the formation of stars and galaxies.”

South Africa is happy with the mega project. First, it is now yielding construction contracts for roads and gigantic fiber-optic networks, which are being built to process all the data in the future.

“This is not only a big science project, but also a big data project,” Cheetham says. “Soon all the information from the dishes will be transmitted to a giant data center in Cape Town. Then it will be sent to supercomputers in various other places in the world. The fiber-optic cables we are laying for the SKA telescope can circle our globe twice.”

The information will also soon be sent to the Science Data Center in the Netherlands. As a partner country, the Netherlands hopes to be at the forefront of pioneering research. “We already have computers here to process the data from our Lofar radio telescope,” says Frank Noijens, of Astron, the Netherlands Institute for Radio Astronomy. We will extend it to process SKA data.”

According to Nijens, it can result in scientific research that can win you Nobel Prizes. “Just as when the lights came on in the universe. We will also challenge Einstein’s general theory of relativity and investigate extraterrestrial life.”

For Richard Rubin in his early twenties, this Nobel Prize is still a long way from my bed, but he is already reaping the benefits of initiative. He works at a training center near the village of Caernarfon, 53 miles from the telescope. In this training center, young South Africans are trained to become electricians, indispensable in telescope maintenance.

Robin is messing around in a classroom trying to find a faulty electrical panel. “Here in the countryside there is hardly any work,” he says. “Now I have the opportunity to learn and support my family. I hope I can work at the telescope, and I would love to stay close to my village, but otherwise I can use my knowledge elsewhere.”

Scientists expect the telescope to yield the first observations within four years that will add to existing knowledge.