There is no place for Waldorf de Zeirider 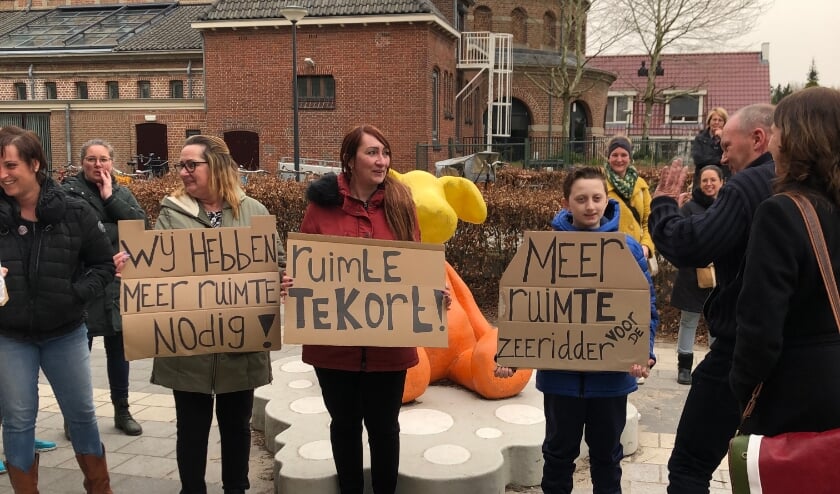 BERGEN OP ZOOM – It was choppy at Waldorf De Zeeridder on Wednesday. Dozens of parents walked out into the school yard armed with protest banners and placards. Their demands: more space for children and recognition of the school’s right to exist. Inside, a two-person delegation from the municipality of Bergen op Zoom met with director Tamar Chavardes to discuss the matter.

De Zeeridder is located in the building of the Borgvliet Community School, which they share with three other organizations. School started a year and a half ago with a class of young children and it grew like weeds. De Zeeidder now has over a hundred students. Two chapters will likely be added after the summer holidays, but no place for them. “A group of pre-school children has lessons in the playroom, which means that physical education and another group cannot be given permanently in the cooking room. The board room attached to the team room is used for violin lessons, indoor coaching and mentoring, while daily activities are carried out The management is there as well and the caregiver has her workplace,” explains Marit Langenberg, the children’s coach, who also has her workplace in a crowded room.

Everyone agrees: Too small common spaces are not suitable for a growing school. “We have proven our right to exist. We don’t set high standards, we just want enough space,” says Caroline Bloom, a mother of three from Zyrederteg. “Our children have a right to that.”

After a long wait, the people of the worshipers appeared. They have no answers for the waiting parents and leave as soon as possible. Director Tamar Schaffards is clearly disappointed. Confidence that the municipality will find a solution has been lost. However, the municipality is responsible for housing schools. All we have been told is that they comply with our demand that we have a black and white timetable for short- and long-term solutions by the end of next week at the latest. ”

She illustrates her struggle so far to get something done in the church. Six months ago, our former advisor promised to resolve the matter before she left. Judge for yourself. Since then we have spoken to people from the municipality, but they are always different. We’ve now had another long conversation about the situation, again with people I’ve never spoken to before. We showed how small the spaces are for many children. What we basically heard was the question: What do you think?

According to Schaffards, one problem is that no one in the city office is in control, so every conversation starts at the same point. We will never come close to a solution this way. I no longer trust him.”

The parents are also very disappointed: “No wonder they picked a harepath so quickly with their tail between their legs,” says Bloom. Parents think about possible new actions.