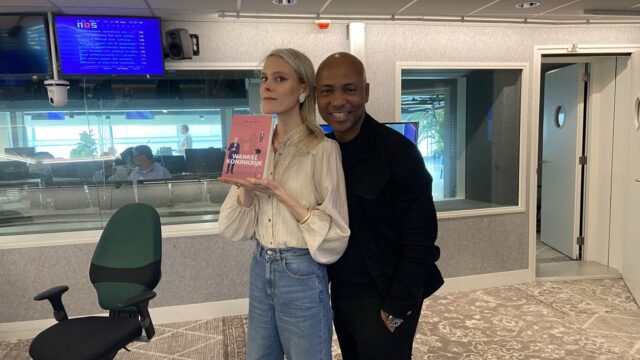 For 7 years, Tim de Wit has been the voice of the UK for us. He appears everywhere when the word Brexit is mentioned and we cling to his news story with all our might in hopes of understanding something of what is happening on the island. In this book, we are reacquainted with a country that is impossible to describe.

“As a reporter, we see the movement that’s happening in the community, we’re in the middle of the power field but we’re also still on the sidelines.” The story De Witt’s hometown asks isn’t the one they’ll always tell. Expectations rarely match reality. We see how De Wit observes and draws new conclusions very carefully.

We in the Netherlands will not be content with a questionable observation, we want facts, clarity, a clear explanation and a brief story. But what do you do when that unmistakable sound proves impossible? How to clearly explain the situation when the picture remains cloudy? There is no time to look for the best way to report when the news is so urgent.

“We are ready in all weather, at any time of the day, to provide the Netherlands with the right information. Sometimes it is like a violin still playing on a sinking ship. Against better judgment, because Holland is also a guest at last. How long will this relationship remain intact? ?” This book presents a beautiful portrait of the impossible task faced by Tim de Wit and that reporters after him face.

“We see the struggle, but also the joy of finding just the right information in a sea of ​​conflicting reports and illustrious but distracting rumours. Adrenaline rushes through our veins when we have to report from the balcony at Westminster Tower without any preparation for another extraordinary political event.” Now that De Wit can look at the situation from a distance, it is possible to tell many of the stories behind the press report.

To identify the ancient power structures upon which the United Kingdom was built, analyze the situation in which the country found itself and take a closer look at the future. UK is a beautiful collective name that we don’t even know what it means.

For years, everything seemed very clear in the country itself, no difficult questions were asked, but now that everything is shaken up, the UK has to reinvent itself. The story that Tim de Witt ultimately tells in this book is certainly not impartial and does not fit into a short news release, but it does ensure that we will consider the press report from the UK more carefully, with more knowledge and above all with much admiration.