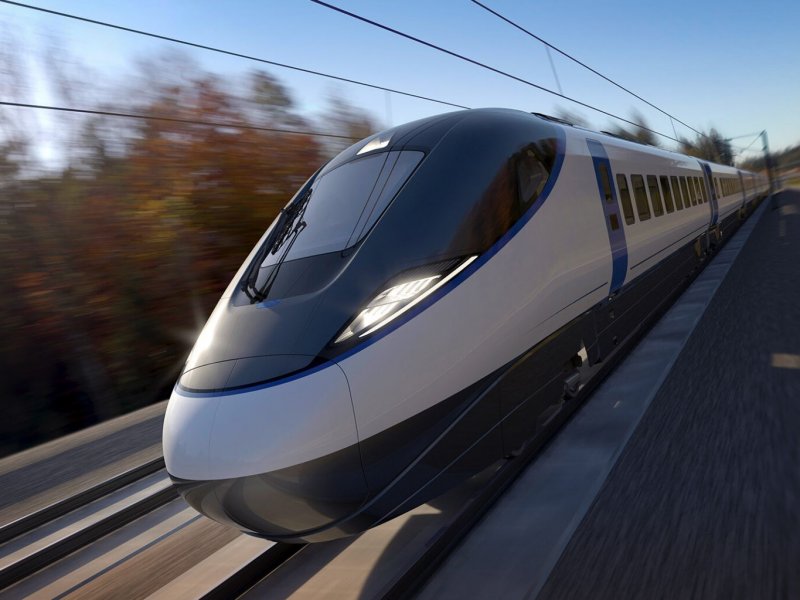 Alstom and Hitachi Rail announced last week that they were the final winners of a tender for Britain’s new HSL train that will run on the future HS2 railway and become Europe’s fastest. The train model has now been submitted. The order amounts to 2.3 billion euros.

The joint venture organization is called HAH-S. The train order also consists of a contract under which the train will be maintained by the company for a period of 12 years. The trains will be built in Newton Aycliffe, Derby and Crewe, which should also ensure the economy is boosted through additional jobs. There is also extensive cooperation with West Coast Partnership, which owns HS2.

In total, there are 54 highly simplified train sets. The new 200-metre, 8-car train and a top speed of 360 km/h (225 mph) will run between London and Birmingham, and, on the existing network, between cities such as Stoke, Crewe, Manchester, Liverpool, Carlisle, Motherwell and Glasgow.

The train sets will be up to 400 meters long when paired, providing seating for 1,100 passengers. Couples will be equipped with the latest technology, such as digital seat reservation, Wi-Fi, and comprehensive passenger information systems.

They will be equipped with advanced digital solutions and will provide high-capacity wireless internet, digital seat reservations and multi-channel information systems using the latest technology. Multiple drives (two trains) are optional, resulting in a 400-meter train with a maximum seat limit of 1,100.

Hitachi Rail will be responsible for the assembly and modification of the chassis, which will be performed at its facilities in Newton Aycliffe. The company recently invested €9.9 million in welding and coating facilities, bringing the total investment to €128.4 million in the workshop, which opened in 2015 and currently employs 700 people.

See also  Zelensky confirms: “I will stay in Kiev” • School closures in Ukraine for two weeks

At the East Midlands plant, the interiors, electronics and wagons are assembled by Alstom. This is done at the Litchurch Lane factory in Derby. The wagons are manufactured at the Alstom plant in Crewe.

It will be some time before travelers can use the new train. Production of the first train is expected to start in 2025 and move out of the factory around 2027. This is followed by a series of extensive testing and approvals. The first passengers are not expected to arrive even between 2029 and 2033.

Small-scale trains will soon be maintained in Birmingham. A new maintenance workshop is being built there by HS2. And when it comes to heavy maintenance, Alstom in Crewe will be where the equipment comes into play.