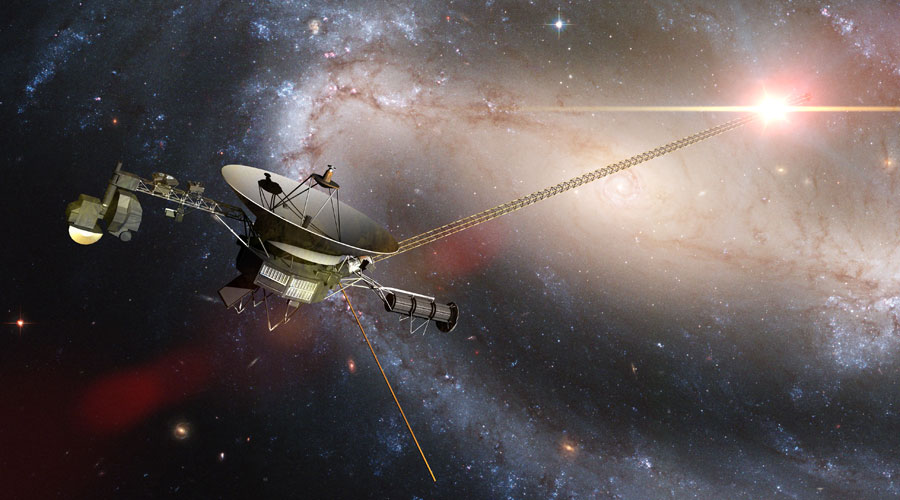 On August 20, 1977, 45 years ago in 2022, NASA launched Voyager 2 and soon after, on September 5, 1977, Voyager 1. The Voyager program is a scientific mission to gain knowledge of the outer planets of our solar system. Although both probes have left our solar system by now, they are still sending information back to Earth.

In 1965, American aeronautical engineer Gary Flandro discovered that Jupiter, Saturn, Uranus and Neptune, the four major outer planets, are arranged once every 175 years so that they can be visited on a single mission. This is what astronomers call the “big tour.” To visit the four planets during one mission, the spaceships must be launched between 1976 and 1980.

The two spacecraft, Voyager 1 and 2, were originally designed as part of the Mariner program. This program was designed by NASA for a flight to the planets Mercury, Mars and Venus. A spacecraft flies near a planet to make recordings. They are called Mariner 11 and 12. Later, they received a separate status and therefore a new name, first Mariner Jupiter-Saturn and later Voyager.

Both probes weigh about 800 kilograms and are equipped with dozens of measuring instruments and cameras. They use what’s called a gravitational pendulum or gravitational thrust: a spacecraft flies across the planets and thus gains speed. When they reach speed enough to fly to the next planet, the probes fly to the next target. As a result, several kilometers can be covered in a relatively short time with relatively little fuel.

Voyager 2 was launched before Voyager 1, because Voyager 2 has a different orbit than Voyager 1. Voyager 2 has a longer journey to the two outer planets. This causes the probe to be launched first due to the position of the planets. Due to Voyager 1’s shorter orbit, it will outpace its twin before reaching Jupiter.

Voyager 2 was launched on August 20, 1977. On September 5, 1977, it’s Voyager 1’s turn. Voyager 1’s primary mission is to fly around Jupiter and Saturn and study the rings, magnetic field, and weather. The second part of the mission is to investigate the limits of the Sun’s influence and to measure the particles in the solar wind. The probe then explores interstellar space. Voyager 1 travels through space at 17 kilometers per second, covering approximately 523 million kilometers per year.

Voyager 1 began photographing Jupiter in January 1979. In March, the probe approached the planet. Voyager 1 has captured stunning images of Jupiter’s famous Great Red Spot. This is a persistent storm three times larger than Earth. The probe is photographing volcanic activity on Jupiter’s moon Io. It is the first time that volcanic activity has been observed elsewhere in our galaxy.

Dust particles caught in a beam of light

The next stop on Voyager 1 is Saturn with its moons and rings. The spacecraft is closest to the gas giant on November 12, 1980, and then 64,200 km away from the cloud cover. Sends the first high-resolution images of Saturn’s rings to Earth. As a result, it was discovered that the gaseous atmosphere of the planet consists almost entirely of hydrogen and helium. Voyager 1 also takes close-up photos of Saturn’s many moons.

After completing its primary mission, Voyager 1 continues its journey through space. In 1990, the spacecraft pointed its camera at Earth to take a picture of it. In the image, the Earth appears as a small blue smudge against the endless and barely visible darkness of space. The famous American astronomer Carl Sagan wrote of this image in his book Pale Blue Dot: A Vision of the Human Future in Space: “This is here. This house. This is us. With everyone you love, everyone you know, everyone you’ve ever heard of.” , every human who lived his life… Every saint and sinner in the history of our human race lived here – on a speck of dust trapped in a beam of light.”

Voyager 2 takes longer to fly to the gas giants Jupiter and Saturn, and then to the ice giants Uranus and Neptune. After visiting the four planets, spacecraft, like Voyager 1, explore the boundaries of our solar system and interstellar space.

The probe arrives at Jupiter a few months after Voyager 1 and studies the planet. Upon reaching Saturn, Voyager 2 discovers a new moon near the planet, called Pan.

After 5 years of “hibernation”, Voyager 2 reached Uranus in 1986. It takes pictures of the blue planet, which is mainly composed of hydrogen and helium. The temperature in Uranus is -216 degrees and the day lasts 17:25 hours. Voyager 2 studies the aurora borealis, the aurora borealis that produce high levels of radiation, leaving the moons of Uranus with no atmosphere. The probe takes close-up images of the moon Miranda. In addition, Voyager 2 discovered 10 new moons near Uranus and two very small moons called Ophelia and Cordelia.

In 1989, Voyager 2 reached its final planetary destination, Neptune. Neptune is the eighth and most distant planet from the sun in the solar system. The blue sky planet, like Uranus, is made largely of hydrogen and helium, but also an abundance of water, ammonia, and methane. The spacecraft detects storms of up to 2,400 kilometers per hour. Voyager 2 specifies that one day on Neptune is 16.1 hours.

The probe is also discovering 6 new moons and narrow rings. To avoid hitting the icy debris, Voyager 2 changed its orbit and flew over Triton, Neptune’s largest moon. There he discovered that there were barriers exploding on the Triton. It comes as a surprise that active volcanoes occur about 4.5 billion kilometers from the sun. After Voyager 2 left Neptune, the entire Voyager project was renamed the Voyager Interstellar Mission. 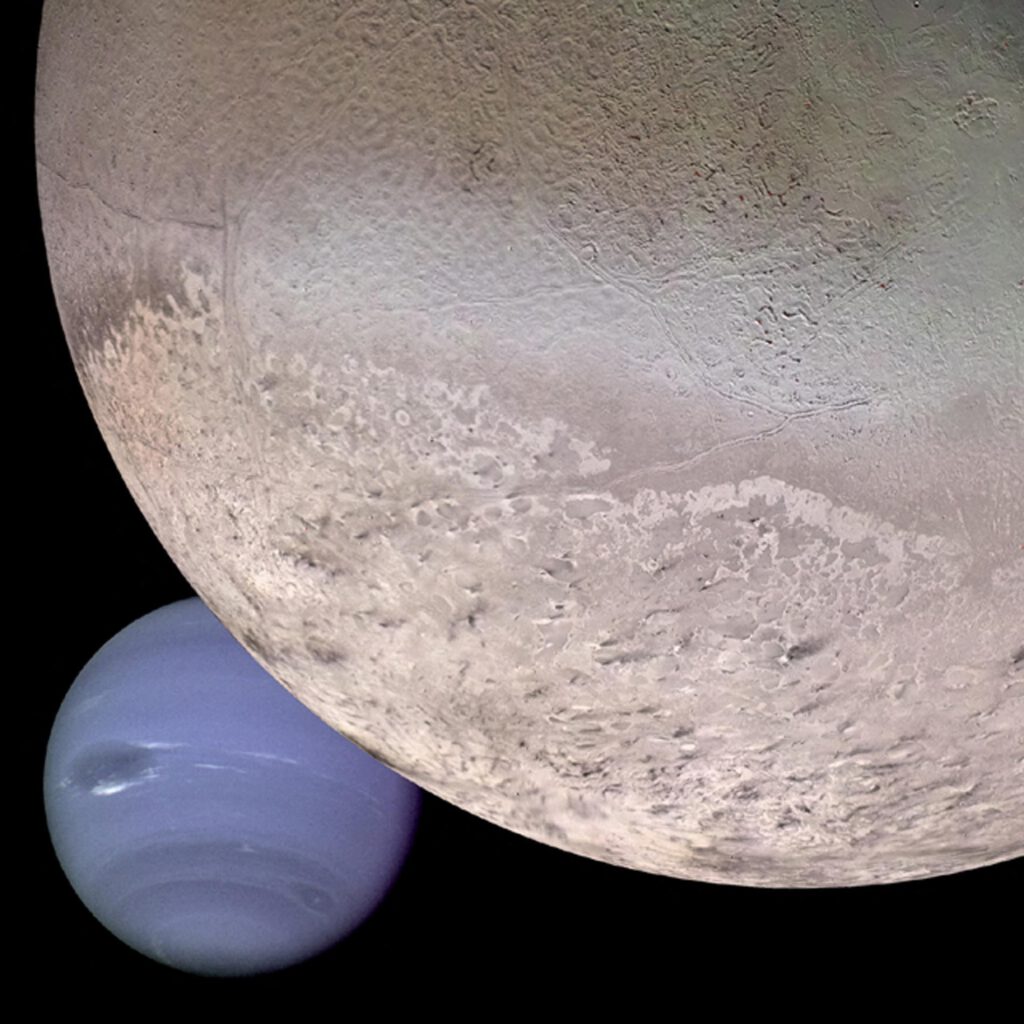 Neptune with Triton in the foreground.

On November 5, 2018, NASA announced that Voyager 2 had also left the solar system. 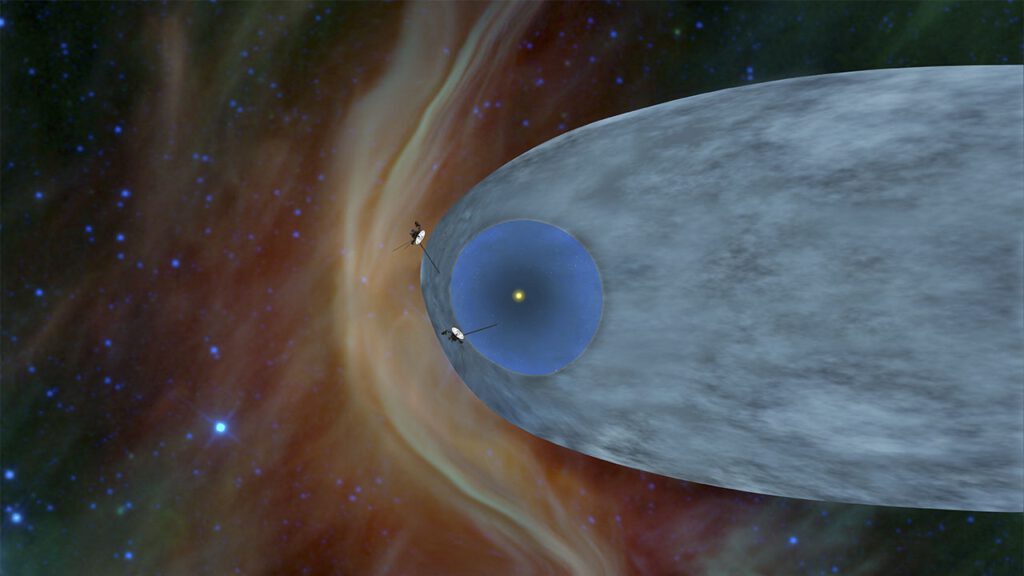 Voyager 1 in interstellar space In this image, Voyager 2 is not yet.

In July 2022, Voyager 1 will be about 23.5 billion km from Earth and Voyager 2 about 19.5 billion km away. NASA expects Voyagers to run out of fuel in the coming years, causing the two probes to lose contact.

Voyager 1 and 2 are the only man-made objects that travel through interstellar space. In about 38,000 years, Voyager 1 will fly past the star Gliese 445 in the constellation Giraffe, less than 1.7 light-years away. Voyager 2 will return “close” to the star after 40,000 years as it passes within 1.7 light-years of the small red dwarf Ross 248. Eventually, like the stars of our galaxy, Voyagers will align with the gravitational pull of the Milky Way and orbit around its center forever.

On board both Voyager 1 and 2 is a gold record composed by Carl Sagan. The paintings contain sounds and images of the diversity of life and culture on Earth. The messages are dedicated to extraterrestrial life forms. However, the odds are very slim that they will intercept the probes and listen to the recordings. So the paintings are seen as a kind of business card, and not a serious attempt to connect with potential extraterrestrial life forms.

The board contains 116 pictures and various natural sounds such as wind, lightning, and animal sounds. Added to this are musical selections from different cultures and eras and spoken greetings from earthlings in 55 languages. It also contains letters from then-President of the United States, Jimmy Carter, and from then-Secretary-General of the United Nations, Kurt Waldheim. There is also a Dutch text recorded by Joan de Boer. If the aliens listen to the recording, they send a “warm regards to all.”