Your benchmark against the English cricketers you only know from TV 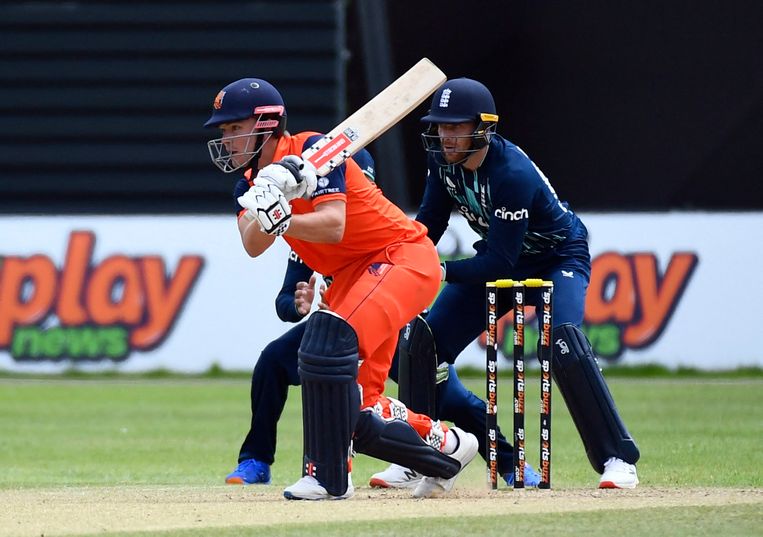 Long before the match between Holland and England, the English acquired the VRA cricket club complex. In the temporary stands at Amsterdamse Bos, English fans hung red and white flags with the names of clubs from the United Kingdom. The weather also has an English accent on Sunday mornings. The sky is cloudy, light drops are falling and parts of the field are covered with large gray sails. During the heavy rain at night from Saturday to Sunday, a lot of water flowed through the sails.

English is the official language of the complex in Amstelveen. About thirty English journalists have found a place in the cramped media space, including behind the window where a ball hit a big star last Friday. Delayed start of the match. The playing field is bounded by a two-hour long rope, and the ground is too slippery to start a fencing. Curious seagulls are amazed by the noise of low-flying aircraft. Under the fading sun, the game finally starts about three hours later than planned.

In the context of the Premier League, the English team plays three matches for a day in Amstelveen these days, which is something special. England holds the title of world champion, while the Netherlands holds a modest position in world cricket. The fact that the Netherlands have been invited to the Premier League is thanks to the overall victory in the Championship League in 2017. An honorable occasion for the national team, who can compete against major countries such as New Zealand, Afghanistan, Pakistan, West Indies and England.

In the first competition, the Netherlands saw a huge sporting gap with the major cricket nations. Ireland won twice, losing the other twelve matches. Sometimes with numbers listed, like last Friday against England. The English scored a total of 498 shots, breaking the world record in a one-day match. “Yes, I slept well,” says Bas de Lied, a day after that historic blow. “You know, it’s strange to worry, if you know what I mean.”

De Lied, the sole captain of Voorburger Cricket, at the age of 22, was looking forward to the confrontation with the English players, whom he usually only sees on television. He admits that the match went differently than he had hoped for. “We worked really hard on it,” he says. “Obviously the difference in level came to the fore. We are now walking around with a bad feeling. But if I can speak in front of the group we all look forward to Sunday. Then we get another chance to show what we can do.”

In the cut-down game on Sunday – due to a late start time – the Dutch professional players limited the damage to the English players, who found time to sign autographs for fans while participating. England won six wickets, giving the estimated 5,000 British fans another win. Wednesday is the last match of the treble with England and the Netherlands also must dispense with Peter Sellar in that match. After 134 caps, the captain announced yesterday that he will stop playing international cricket due to persistent back problems.

An interested witness to both defeats against England was Ryan Campbell, Australia’s national coach for the Dutch national team, who suffered a heart attack during a holiday in England in March. He owes his life to the determined action of a woman on the field who had just received her first aid certificate and resuscitated him. Campbell, 50, spent five weeks in the hospital and doctors found no permanent damage. He hopes to resume his duties as national coach later this year.

“It was intense, but it’s good to see it in the stands again,” says de Lied. He endorses the words of the national coach, who qualified for the Premier League earlier this year as “the most important chapter in Dutch cricket history”. “It’s absolutely true,” says de Lied. “The chance to play against the world champion is one we may never get again. We can learn a lot from these matches, regardless of the outcome.” He points out that the Netherlands has a very small team of three people in their 30s, one player over 28 and the rest under 26.

Another difference for the Netherlands is that professional players who play in England for international matches are not released by their clubs. as Fred Claassen (Kent KCC) and Colin Ackerman (Leicestershire). The federation may demand players, with the risk that clubs will cancel contracts with players. De Lied: “The players are placed in front of the block: the club or the country. The problem is that those clubs are giving away the English players. It’s a shame, but now it’s true that we can give the young Dutch players the opportunity to show their faces at this level.”

No national coach in the Netherlands is as close to the players as Ryan Campbell. The former Australian international cricketer can literally look them in the eye as a referee in the Top Class Weekly.