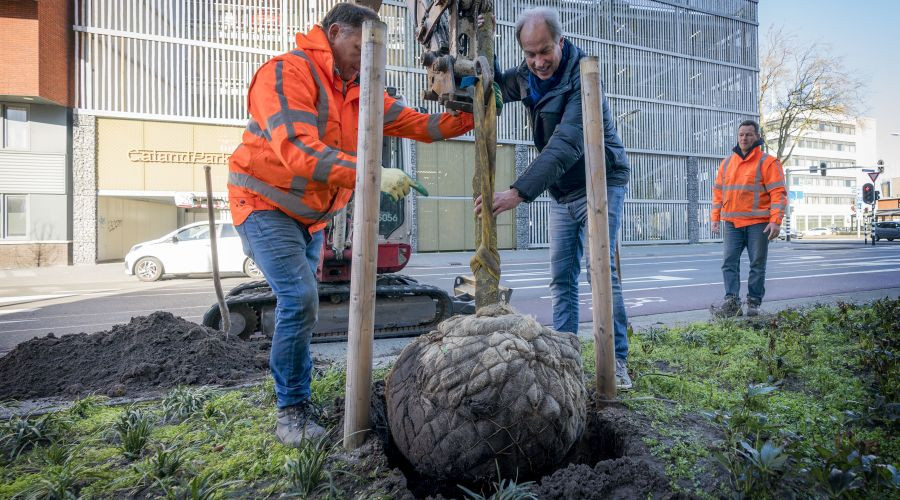 With the planting of the last tree by Alderman Anne Mulder, the design of the public outdoor space in Laakhaven-West is nearly complete. In recent years, the area has been transformed from a commercial complex into a residential and business area. Now that the layout of the public space has been finalized, the area is progressing further and further into the closing stage.

“It was great that I was allowed to plant a tree in this particular part of The Hague,” Mulder says. “Due to the huge housing shortage, more will be built in the coming years. Adequate facilities and green spaces remain a top priority for me in the city’s growth. This ensures that it remains an enjoyable life in The Hague.”

During the redevelopment of public space in West Lahaven, approximately 200 new trees were planted and 7 public plazas were created. An old row of existing flying trees has been deliberately preserved.

The star bike path along the Waldorpstraat connects the area to a network of fast, safe and comfortable cycling. Historic heritage has also been given a place in the new Laakhaven-West. For example, restored harbor cranes are reminiscent of activities of the past, and buildings such as the Maakhaven and RAC Halls are a feature of the area’s history.

About 450 meters from the callandkid were replaced. Swedish rocks were reused in the pier and Johan van Veenplein from the area and Norfolk site from Scheveningen. The renovation of Calandkade created a new walking path along the water, where the trees and plants were carefully selected so that the outdoor space also had a green appearance in the fall and winter. This greening makes an important contribution to reducing heat stress and more sustainable use of rainwater. Moreover, space has been made available on the berth for the barge, which serves as the mooring place for historic boats.

See also  Amriswil - a science in itself